Electron tomography has become a widely used and powerful technique for three dimensional (3D) structural analysis in both physical and biological sciences for decades. However, there are still remaining challenging in the areas, such as beam sensitive or low atomic number materials. In this work, we demonstrated that defocused-probe ptychography can produce 3D images from weak-scattering samples at a low dose, based upon optical sectioning and tilt series approaches, respectively.

Since the development of aberration correctors, scanning transmission electron microscopy (STEM) has become a widely used and powerful technique for materials science research. Using standard high angle annular dark field STEM imaging, 3D electron tomography which recently has been demonstrated at atomic resolution provides a fundamental understanding of structure-property relationships at the atomic level. However, there are still remaining challenging in the areas such as 3D imaging of beam sensitive materials or low atomic number materials. Electron ptychography which is one of the emerged new imaging techniques has advantages of super-resolution [1,2], high phase sensitivity [3], low-dose [4]and the capability of integrating with spectroscopy[5]. In the focused-probe type of ptychography, scanning arrays of the probe are required to satisfy the sampling with a reasonable field of view, which can cause the total acquisition time and electron dose on the sample to be typically high. Therefore, it becomes ever more difficult to combine this type of ptychography further with tomography, where the recording of an entire tilt series is needed for tomographic reconstruction. Instead, using defocused-probe ptychography as shown in Fig. 1 (a), a probe defocused by a few tens of nm’s can be scanned over a large area of a specimen with highly overlapping probe positions. As a result, just a few hundreds of probe positions are sufficient to reconstruct a 2D phase. It has shown success in imaging light atoms together with heavy atoms in a LaB6 crystal [3] and MoS2 at a very low dose [4]. A new generation of fast direct electronic detectors combined with the defocused nature of the probe and few probe positions offer the potential of 3D phase imaging as well as greatly reducing the size of the collected data set.

In this work, we firstly demonstrated that defocused-probe ptychography using an inversed multi-slice method is able to produce 3D optically sectioned images of a thick sample[6], as shown in Fig. 1 (a). The experiment was carried out on a sample of carbon nanotube bundles (CNTs) as shown in Fig. 1 (b) at 60kV. Using the algorithm of 3PIE [7], the phases of the sample at different sample heights as shown in Fig. 1 (c) and d) were reconstructed. The method provides high contrast, quantitative phase maps at close to atomic lateral resolution and with a few tens of nanometers depth resolution.

Furthermore, we will implement ptychographic tomography to reconstruct the 3D structure of DNA origami assemblies with high phase sensitivity and at low doses. Therefore, we expect that electron ptychography potentially paves a way to determine the 3D structure of the weak scattering and beam-sensitive materials, such as MOF, cells and viruses, in conjunction with tilt series tomography. 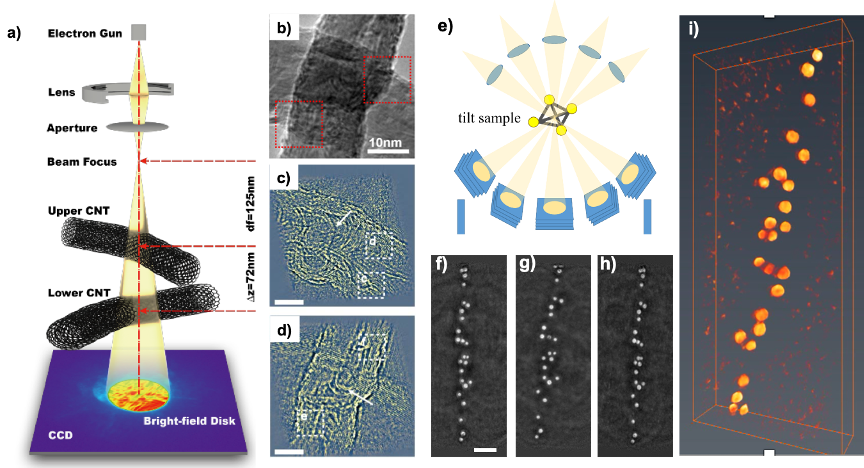 [9]  The authors acknowledge funding from the National Natural Science Foundation of China (11874199).