A wüstite is an iron oxide material that is used as precursor for obtaining iron-based catalyst for ammonia synthesis. Using a home-build high-pressure microreactor, we have investigated local changes of the morphology and the structure of a commercial wüstite sample at relevant reduction conditions by quasi in situ TEM. Our results indicate that the wüstite reduction leads to the formation of individual iron particles that are interesting for the ammonia synthesis.

To understand the catalysts and design new of materials, in-situ transmission electron microscopy (TEM) has been developed. It provides a powerful tool to gather information on the real time evolution of catalysts during their operation. Since the invention of the TEM, Ernst Ruska and many other authors have achieved tremendous progress in order to analyze the working materials under controlled environmental conditions up to 1.2 bar.[1–4] Despite this progress, the current working pressure is limited to 1.2 bar[5], which can still be irrelevant for studying certain catalytic materials. In this case, the quasi in-situ TEM approach is crucial as it allows to obtain higher pressures (up to 30 bars) and investigates local changes on the same area of a sample before and after treatment at conditions relevant to industrial processes (high pressure and temperature) outside of the TEM.[6,7]

Herein, we have investigated the reduction of commercially available iron oxide (wüstite), using the quasi-in-situ TEM approach. Wüstite is the most important iron oxide used as a precursor for the ammonia synthesis over iron catalysts, due to an easier reduction and a higher activity compared to the traditionally employed magnetite.[8]

We have investigated the reduction of commercial wüstite powder from Sigma-Aldrich by quasi-in situ TEM, using a double Cs corrected JEOL ARM 200F microscope operating at 200 kV. In order to reach relevant reduction/activation conditions (10 bar of 1N2/3H2, 500 °C), we have designed a homebuilt TEM grid reactor. It consists of two CF-16 parts, which are sealed using a gold-coated copper gasket. Inside the microreactor, the TEM grid is mounted into an SiC crucible, which is heated, using an infrared laser (805 nm). Then, identical location TEM imaging was conducted after transfer of the sample in the glovebox.

Figure 1 shows the results of the quasi in situ TEM experiment. The pristine wüstite presents diffraction contrast due to a defective structure (Fig. 1a). This is formed as a result of wüstite preparation by melting magnetite precursors followed by a rapid quenching at room temperature. Analysis of selected area electron diffraction (SAED) has confirmed the crystalline structure of wüstite (Fig. 1b-c).

After the reduction treatment, the wüstite sample undergoes a drastic morphological change with the formation of nanoparticle agglomerates (Fig. 1d), which shows a core-shell-like structure. A different microstructure is observed between the particles in the shell and the ones inside the core. The particles in the shell have a more spherical-shape with particle sizes varying between 5 to 20 nm. On the other hand, the particles inside the core show a more elongated shape with larger particle sizes. In addition, the electronic reduction of the particles is evident in SAED (Fig. 1e-f). SAED has confirmed the presence of a polycrystalline structure that is characteristic of α-iron. 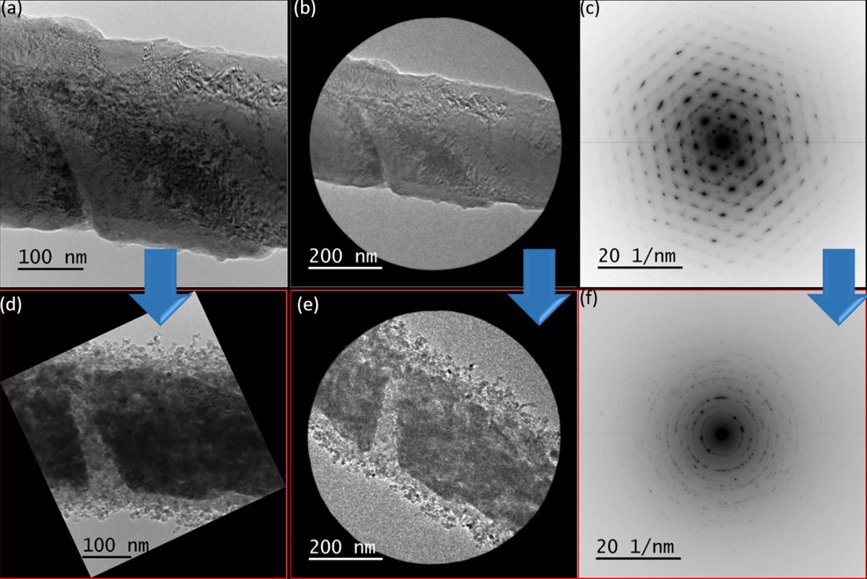 Figure 1. Identical location TEM investigation and electron diffraction of a commercial wüstite sample before (a, b and c) and after (d, e and f) exposure to a total flow of 4 mL/min of a H2/N2 = 3:1 mixture at 10 bar and 500 °C.

To get a deeper insight on the wüstite reduction into α-iron, the intensity of SAED image was azimuthally averaged and plotted versus scattering vector (s), using the PASAD plugin in the Gatan DigitalMicrograph® software. Figure 2 shows the azimuthally averaged intensity of the SAED indexed to the a-Fe structure. However, multiple Bragg peaks ({100), {200}, {211}) show an asymmetrical shape. This could be due to the presence of residual wüstite phase. This may be confirmed by the Bragg peak at 3.90 nm-1 which is close to 111 Fe1-xO. Since the metallic iron is very sensitive to oxidation, the incomplete reduction can be related to the presence of water vapour formed during the reduction process. In addition, previous studies have revealed that in the absence of structural promotors such as Al2O3, CaO, the wüstite grains can undergo disproportionation to magnetite and metallic iron at the early stage of the reduction.

Figure 2. Selected area image and the analysis of its diffraction pattern showing the wüstite particles reduction.

Using a high pressure microreactor, we have shown the ability of quasi in situ TEM to investigate local changes of the morphology and the structure of a commercial wüstite sample at relevant reduction conditions. Our results indicate that the wüstite reduction leads to the formation of iron particles for the ammonia synthesis. However, residual wüstite phase have remained. Thus, we will prospectively investigate the reduction condition on the iron formation by varying the total pressure.