Chemical Looping Combustion (CLC) is a midterm solution for fossil fuel utilization with inherent carbon dioxide capture, based on the use of an oxygen carrier material. The oxygen carriers (OC) replace air to provide oxygen to a wide range of fuels for combustion, via reduction/oxidation cycles in a circulating fluidized bed reactor at high temperature. The synthetic OCs are usually ceramic-supported oxides of metals (Ni, Cu, Fe, Co, ..) [1]. Copper supported on aluminum oxides is a very promising system that is currently under investigation for its industrial use in CLC due to its flexible redox behavior that ensures high reactivity and oxygen transfer capacity. However, successive high temperature redox cycles induce chemical, structural and morphological changes in the material leading to a degradation of reactivity. While the fresh OC shows, by SEM images and XRD patterns, the presence of CuAl2O4 and highly dispersed CuO phase nanoparticle in mesoporous g-Al2O3, as the sample ages, we observe an increase in the number of large CuO particles, transformation of g to a-Al2O3, pore size increase together with the formation of cracks in the alumina support [2]. In order to progress in the understanding of OC degradation throughout cycling, we have studied fresh and cycled CuO impregnated on alumina by a correlative microscopy approach employing the multi-scale and multiselective SEM-EDX, TEM-EDX and STXM-XAS techniques.

The initial beads are ~60 µm in diameter and composed of g-Al2O3 on which CuO was impregnated at incipient wetness before being calcined at 800°. The mimicked CLC cycles have consisted in atmospheric pressure air and H2 cycles at 900°C in a TGA. Ultramicrotomy sectioning was performed on capsules of impregnated bead powders in TEM resin to a thickness of 100 nm and placed on Ni and Au TEM grids. Ni grids were dedicated to STXM and Au grids to TEM, both being taken from the same capsule area. SEM imaging was performed on Ni-grids using a BSE detector (~10 nm resolution @ 5kV) and on Au-grids in STEM-HAADF mode (~2 nm resolution @ 30kV) in a FEI Nova nanoSEM (IFPEN). EDX mapping was performed with a 80 mm² Oxford Instrument spectrometer. STXM was performed at the HERMES beamline of the Synchrotron Soleil facility. Energy stacks and mappings were performed at the Cu L-edge and Al K-edge in order to identify the specific spectral features of each compound and to map their distribution at the ~40 nm resolution. Using external standards of CuO, CuAl2O4, g- and a-Al2O3, spectral features at 934 eV, 933 eV, 1579 eV and 1581 eV were representative of each phase respectively. TEM was performed at 200kV on a JEOL 2100F in both bright field TEM and STEM-HAADF, together with EDX analyses. 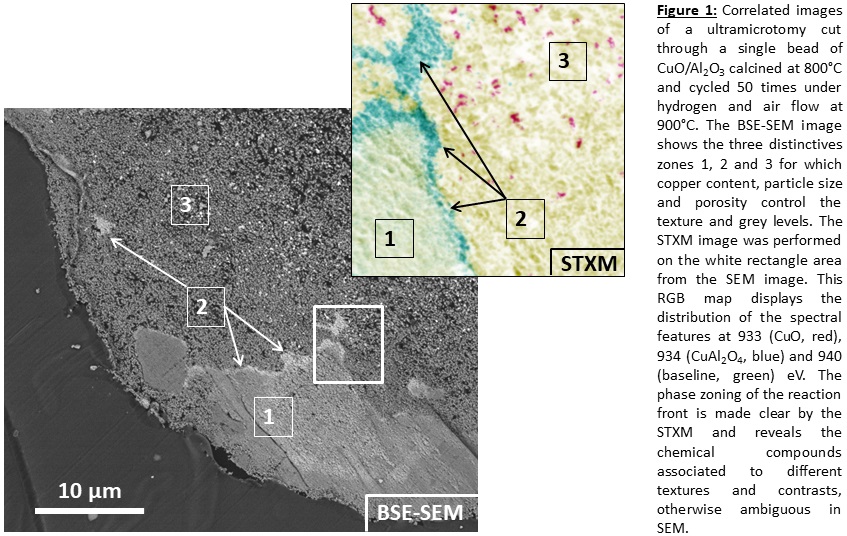 The fresh beads are homogeneous very fine grained g-Al2O3 and finely dispersed CuO nanoparticles in the 10-20 nm range in size, with occasionnaly µm-sized CuO particles resting on the outer edge of beads. With progressive cycling, we observe at the bead scale the disappearance of the large CuO particles and the propagation of a gamma to alpha reaction front in the solids. At smaller scale (10´10 µm2), this front displays a well-defined structural-chemical gradient characterized by (see figure): zone 1, an initial g-Al2O3 phase associated with Cu-aluminate (with minor CuO nanoparticles), zone 2, an intermediate thin layer (< 200 nm) of Cu-aluminates, enriched in Cu compared to the bulk, zone 3, a final massive a-Al2O3 phase supporting poorly dispersed bulky CuO particles. Across this front, the size of alumina particles sharply increases with the proportions of g- to a-Al2O3 inducing a large increase in pore size and leading to a lack of cohesiveness between the particles. The proportion of copper shows a strong variation from an initial 10 % equivalent to that of the fresh matrix in zone 1, to a maximum at the edge of the reaction front of zone 2, then dropping to below detection limits in the a-Al2O3 in zone 3. However, in zone 3, copper is concentrated in localized particles of several tens of nm in diameter indicating a strong sintering effect. The Cu-rich zone 2 is characterized by a higher proportion of CuAl2O4 compared to the fresh matrix, with uneven increase in alumina/aluminate particle size.

These results suggest that the high mobility of copper during redox cycling is linked to the g- to a-Al2O3 phase transition, strongly promoted by the CuAl2O4 which may act as an intermediate. Indeed, the g- to a-Al2O3 transition should not occur below 1000 - 1100 °C [3], and ionic migration of copper in and out of the alumina during oxidation and reduction respectively could catalyse the α to γ phase transition. In-situ STEM observation at 900 °C under H2-reduction have shown the migration of Cu2+ to form copper nanoparticles from a starting oxidized sample mainly composed of homogeneous CuAl2O4. It is suspected that the expelling of Cu from the spinel structure of CuAl2O4 favors the formation of the corundum structure of Cu-free Al2O3. Reversely, the oxidative formation of spinel is only possible in the Cu+g-Al2O3 system, and strongly limited in the case of Cu+a-Al2O3 [4]. To minimize the energy of the system, and thanks to the high temperature of oxidation (900°C), the mobility of copper on alumina during oxidation is sufficient to either form (1) CuAl2O4 at the expense of g-Al2O3, and (2) larger CuO particles on a-Al2O3 by sintering. Through a step by step migration mechanism induced by the redox cycling, copper is being gradually concentrated at the external border of zone 3, as this one expands through the beads until reaching complete a-Al2O3 formation. Fractions of copper not being able to reach g-Al2O3 particles during oxidation sinter to form larger, more stable particles on the a-Al2O3 surface.

This study demonstrates how correlative multi-modal and multi-scale imaging reveals the dynamic interactions of metals and ceramic supports in complex reactive systems at the 100 µm scale. Further steps of this study will involve the multi-scale operando investigation (by TEM, XAS and STXM) of this system in order to validate the model hypotheses made here.