SUMMARY: We show that high-resolution phase-contrast synchrotron X-ray tomography is a promising asset to study bone and soft tissue development. Using this cutting-edge technique to study muscleless mice embryonic bones could increase our understanding of the mechanobiological regulation of bone morphogenesis.

INTRODUCTION: In humans around weeks 6 to 8 after conception a cartilaginous skeletal precursor of the bones is formed. Then during fetal growth, the bone develops by replacing the cartilage with mineral. After a central region of the bone is mineralized, mineralization continues at the so-called growth plates towards the bone peripheries (Figure 1a). Normal bone growth depends on the mechanical stimulation generated by muscle contractions in the whom [1]. Fetal immobilization can have a dramatic effect on the skeleton resulting, for instance, in less mineralized long bones that can fracture before birth [2]. Until now most studies of the phenomenon were based on 2D techniques. Many questions regarding the early stages of embryonic bone formation are still open. A fundamental question is how do mechanical forces affect the process of bone formation at a tissue level? In particular the relation between mechanical loading and the pre-mineralized cells (chondrocytes) in the growth plates remain to be elucidated. One of the reasons for the open questions could be the lack of high-resolution 3D imaging methods suitable for non-mineralized tissues. The imaging of soft biological materials by conventional X-ray tomography is very challenging due to limited absorbance. Phase-contrast imaging was developed more recently to image materials that weakly absorb X-ray radiation but have clear boundaries [3]. The technique has successfully been applied to some soft biological tissues [4,5], but not to investigate the structural effect of mechanical forces on embryonic early mineral deposition and to image growth plates. In this study, we aim to characterize and quantify the effect of muscle-based mechanical loading on the pre-mineralized tissue of embryonic long bones and on the very first stages of mineralization by high-resolution inline phase-contrast synchrotron X-ray microtomography.

METHODS: We study the humeri of Pax3Sp-d/Sp-d (Splotch-delayed) muscleless limb mice. For this study we considered the embryonic stages TS23 & TS24 to study the very first stages of mineral deposition and TS27 to study the humeri just before birth. Mutant embryos at TS23 (n=3), TS24 (n=4) and TS27 (n=4) were compared with littermates with normal skeletal muscles at TS23 (n=4), TS25 (n=5) and TS27 (n=4). 3D phase-contrast X-ray tomography was performed at the Diamond-Manchester Imaging Branchline I13-2 (Diamond Light Source, Oxfordshire, UK). A pco.edge 5.5 camera was used with 4x total magnification, resulting in effective pixel sizes of 0.81μm. Initial processing of the tomographic volumes was performed using the ImageJ and Dragonfly 3.6 (ORS) software platforms. Matlab scripts were written to perform: 1. semi-authorized division of the growth plates in regions (characterized by different cell activities) based on 2D cell properties and 2. 3D analysis of the properties of each cell. The cell properties considered in the analysis were size, orientation (angle between each cell and the horizontal plane), density and shape (ratio between cells’ long and short axes).

RESULTS: Importantly, as our aim was to understand the role of the soft tissue before mineralization, using phase contrast enhanced tomography allowed us to distinguish between different pre-mineralized (marked as H, P, R in Figure1b) and post-mineralized cells (B in Figure 1b). Even if the post-mineralized region in mutants was significantly smaller than in controls the length of the pre-mineralized zones, and the relative proportions, were similar in both control and mutants.

The 3D cell analysis showed that the chondrocyte densities, volumes, sizes and shapes differed between controls and mutants in all regions. Densities were higher in controls than mutants, with the greatest difference at TS24. Furthermore, our results indicate that the chondrocyte densities decrease with time for both controls and mutants. At early embryonic stages, mutant cells were smaller compared to control ones (Figure 1c). In all regions of the growth plate, the size of chondrocytes decreased in time for both controls and mutants. At early stages the chondrocytes in mutant samples were less elongated (greater short axes/long axes ratio) than control samples (Figure1d). Interestingly, unlike the other measured 3D structural properties, the chondrocyte orientation did not significantly change in time or when comparing mutant mice to control mice (Figure1e). However, the analysis of the angles showed a change in orientation between regions, namely from dispersed to well-oriented, that clearly marked the passage between different regions. 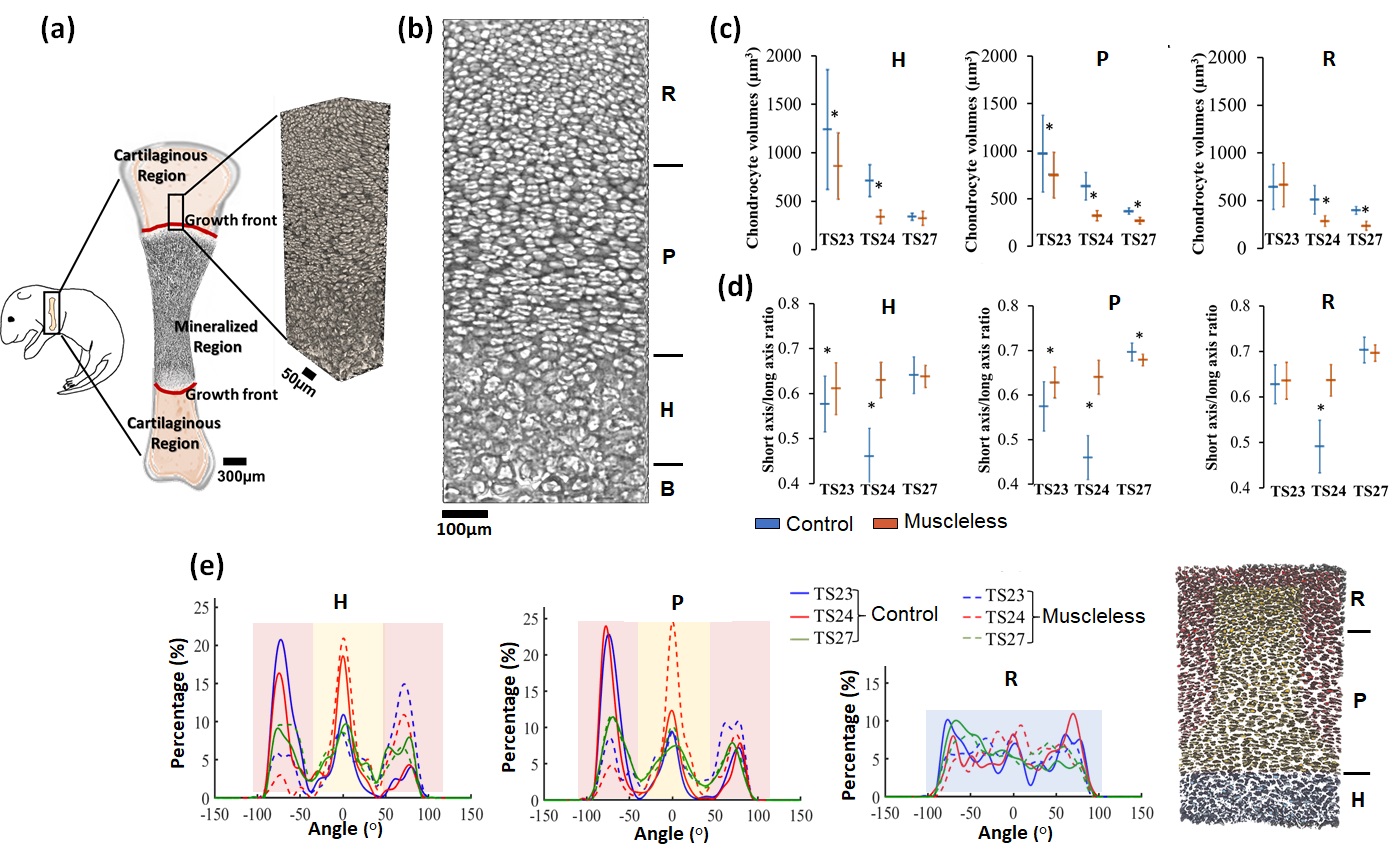 Figure1.  (a) Schematic representation showing that in embryonic humeri the growth plate is the area of growth located at the mineralization front (b) Classification in zones: resting (R), proliferating (P), hypertrophic (H) and mineralized (B) regions. (c) Cell volumes and (d) eccentricities (1= spherical cells). Control mice on the left in blue and mutants on the right in orange. The mean values and standard deviations were calculated from each region (including 400 to 4000 chondrocytes). * = p<0.05. (e) Angle between the cell main axes and the horizontal plane (presented as percentage). On the right a 3D volume shows schematically the areas of the growth plates that contributed to a certain angle population.

DISCUSSION: High-resolution phase-contrast enhanced X-ray tomography is a promising key technique to increase our understanding of the mechanobiology of bone formation in embryonic long bones and its dependence on muscular loading. In particular we have demonstrated the following: 1) Differences between controls and mutants pre-mineralized cells are greater at early embryonic stages and in particular at TS24; 2) the chondrocyte density, size and elongation decreased in response to immobilization; 3)  in the case of controls, the data show that chondrocytes reach the highest elongation, suitable for efficient stacking in columns necessary for the following mineralization, at TS24, while in mutants the chondrocyte shape remains constantly more rounded at all developmental stages [6].