In this work, the maximum a posteriori (MAP) probability rule, which combines statistical parameter estimation theory and model-order selection, is applied to simultaneously acquired annular bright-field (ABF) and annular dark-field (ADF) scanning transmission electron microscopy (STEM) images. For this, an extension of the commonly used parametric models in STEM is proposed, hereby taking the effect of specimen tilt into account. Image formation in ABF STEM is indeed sensitive to tilt of the electron beam with respect to the crystal zone axis. Using simulations as well as experimental data, it is shown that the proposed methodology can be successfully used to detect light elements in the presence of heavy elements.

Recently, the maximum a posteriori (MAP) probability rule has been introduced as a tool to determine the most probable atomic structure in an automatic and objective manner and to detect atomic columns and even single atoms from high-resolution ADF STEM images [1, 2]. The method is especially useful for the analysis of beam-sensitive materials for which limited electron dose conditions need to be used. The detection of light-element atomic columns from ADF STEM images, though, is challenging since light elements only scatter electrons weakly to high detector angles. Therefore, a simultaneous acquisition of both ABF and ADF STEM images is an interesting option to detect atoms of a large range of atomic numbers since ABF STEM offers improved light-element visualization in the presence of heavy elements.

In case of beam-sensitive materials, the methodology of the MAP probability rule can be extended to be applied to simultaneously acquired ABF and ADF STEM images. For this, it is important that a reliable parametric model is used which quantifies both the ABF and ADF images simultaneously. Hereby, one needs to take into account that the observed atomic column positions in ABF STEM images are sensitive to specimen tilt [3-5]. In order to highlight the importance of taking into account the effect of specimen tilt, a simulation of SrTiO3 with a thickness of 10 nm has been performed with a tilt of 5 mrad along the [010]-direction. In Figures 1(a) and (b), the estimated atomic column positions by using a parametric model including the effect of specimen tilt (red dots) and by using a model neglecting tilt (yellow dots) are compared to the true column positions (green crosses). Quantitatively, the distance of the estimated column positions in Figure 1 from the true positions neglecting tilt is 18 pm, whereas including specimen tilt reduces this to 8 pm.

As an example of the applicability of the proposed methodology for atom column detection, simultaneous ADF and ABF STEM images of LiMn2O4 have been acquired. Materials containing light elements, such as Li, are sensitive to the electron beam and need to be imaged with a limited incoming electron dose, leading to noisy images such as shown in Figures 2(a) and (b), where the determination of the number of atomic columns and their positions is not straightforward by merely visually interpreting the image data. Figures 2(c) and (d) show the most probable parametric models indicated by the MAP probability rule for the ADF and ABF STEM image data of Figures 2(a) and (b), respectively, including the detection of Li columns.

In conclusion, the concept of combining statistical parameter estimation theory and model-order selection through the MAP probability rule for atom column detection has been illustrated for simultaneously acquired ABF and ADF STEM images. Hereby, it is important to take the effect of specimen tilt, which shifts the ABF peak locations from the true atomic column locations, into account. Small tilts of the electron beam with respect to the crystal zone axis can indeed be present in ABF STEM images [6].

Figure 1: (a) Simulated ADF and (b) ABF STEM image of 10 nm-thick SrTiO3 with a tilt angle of 5 mrad where the highlighted areas have been enlarged in the insets. The green crosses depict the true atomic column positions. The estimated atomic column positions obtained by performing model fitting including specimen tilt are shown by red dots, whereas for neglecting specimen tilt the estimated column positions are depicted by yellow dots. The inset on the left indicates the arrangement of the Sr, Ti-O, and O columns in (a) and (b). 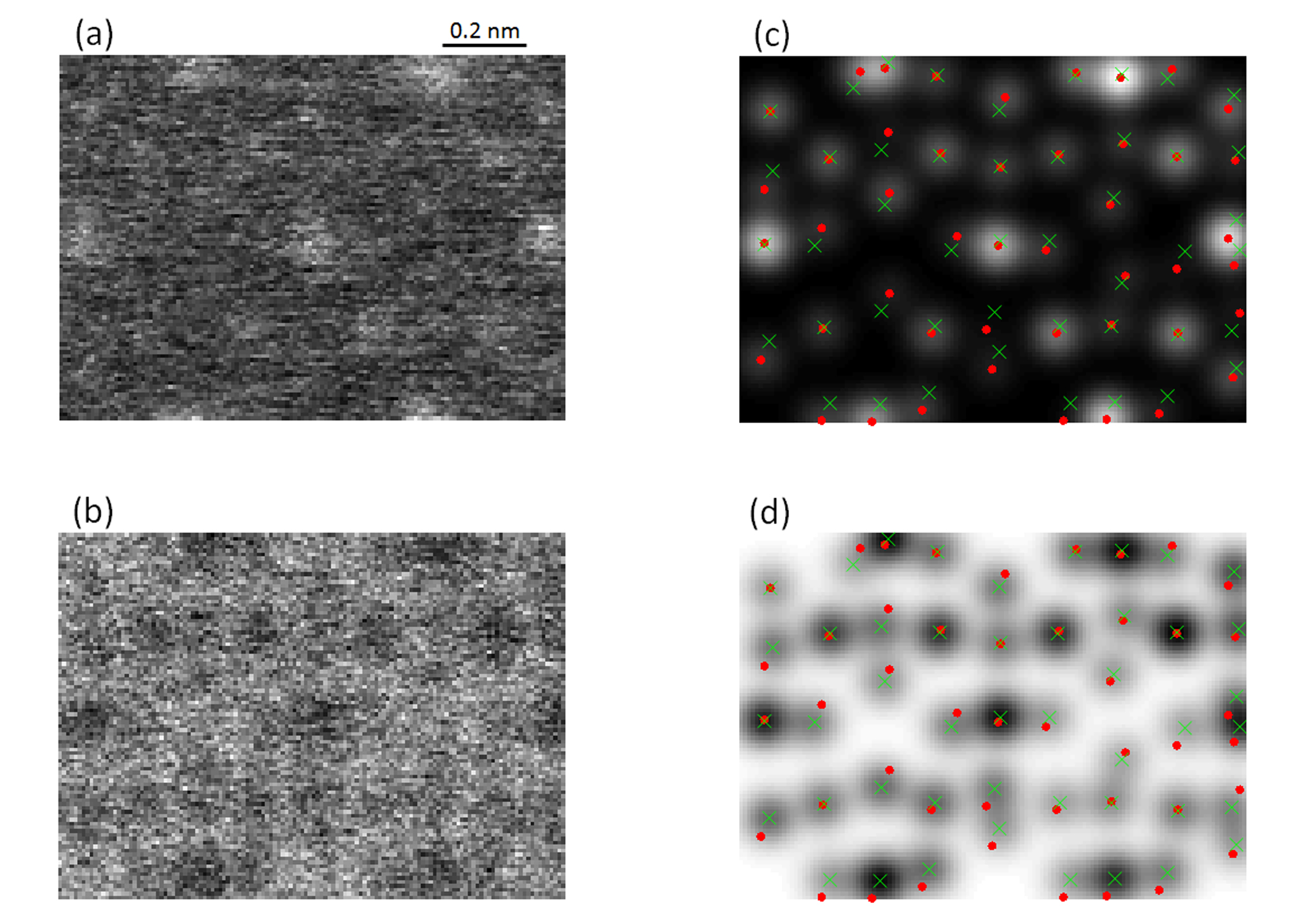 Figure 2: (a) Experimental ADF and (b) ABF STEM image of LiMn2O4. (c) Most probable refined model of the experimental ADF data in (a) and (d) most probable model of the ABF data in (b) obtained from the MAP probability rule by analyzing the data in (a) and (b) simultaneously taking into account specimen tilt. The red dots indicate the estimated column locations corresponding to the fitted ADF peak positions, whereas the green crosses correspond to the estimated ABF peak positions.