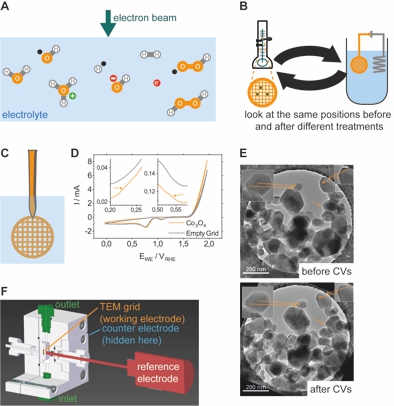 Figure 1. A) possible products of beam damage in an aqueous electrolyte. B) The concept of identical location imaging (ILI). C) ILI with a pair of gold-coated tweezers. (D) Corresponding CVs reveal strong signals from the tweezers. E) Results from ILI on Co3O4 (OER in 100 mM KOH) with the tweezer approach. F) Our quasi in situ electrochemical cell minimizes parasitic contributions.

The continuous rise of the global temperatures necessitates a shift away from fossil fuels toward renewable energy sources. Central to this change are electrochemical processes, to reduce the general CO2 concentration in our atmosphere, or to harvest and store ‘green’ energy. The latter is needed because renewable power sources such as wind or solar plants are intermittent in nature. This means that they do not continuously deliver energy at a constant power level, but rather have strongly fluctuating outputs. The power delivery may not peak at the same times and locations as demand reaches a maximum (e.g. solar plants do not yield power at night or less populated areas might be windier). Thus, new concepts to store any excess energy are required in order to access the energy either at a later point or at a different geographical location. One of the most efficient solutions is the conversion of electrical energy to chemical energy by means of water splitting. The resulting hydrogen can be stored and transformed back to electrical energy using fuel cells.

In order to fully understand and, subsequently, be able to enhance the efficiency of these systems, a detailed analysis at the nanoscale is required, for which TEM investigations are perfectly suited. However, while there are dedicated liquid cell specimen holders, sample preparation and especially also beam damage pose challenges to in situ or operando experiments. Especially the latter is very critical as beam damage is severe and very difficult to control: the electrolyte itself, as a condensed phase, is prone to undergo reactions to numerous highly reactive species under the influence of the electron beam (as illustrated in Figure 1A) [1]. These products can be both reducing as well as oxidizing, i.e. their influence on the observed reaction cannot be predicted with confidence. This problem is amplified by the fact that some of the available liquid holders feature very thick liquid layers in the micrometer range [1], which, besides requiring higher beam currents, also render EELS measurements impossible.

An alternative to in situ measurements that can circumvent beam damage in the electrolyte is identical location imaging (ILI), where the same areas of the specimen are observed after different stages in the treatment (see Figure 1B). This way, the analysis is separated from the reaction. In principle, ILI can be done in different ways for electrochemical systems. For instance, a wire can be punched through the grid [2], which, however, can cause problems with contacting and destruction of the grid in the long term. Alternatively, an inert (e.g. gold-plated) pair of tweezers can be employed to mitigate these issues (refer to Figure 1C) as it makes a reproducible, good electrical contact.

In this work, we present ILI studies of the alkaline oxygen evolution reaction (OER) on Co-based oxides in 100 mM KOH electrolyte (pH 13). We loaded an UltrAuFoil grid with Co3O4 powder and performed cyclic voltammetry (CV) between 0 VRHE and 2 VRHE in a three-electrode cell, as shown in Figure 1D. Figure 1E displays bright field TEM images of the same region acquired before and after 30 cycles. This treatment causes small nanoparticles, tentatively assigned to reduced cobalt oxides, to form on the surface of the larger spinel grains. Beam dose studies showed that these do not originate from beam damage.

The CVs in Figure 1D reveal a drawback of the tweezer approach: the majority of the current stems from the gold tweezers themselves as they exhibit a large surface area. The cobalt signals (marked by arrows) are almost completely masked by parasitic currents from the tweezers. Thus, we constructed an electrochemical cell specialized for identical location experiments, similar to the previously developed quasi in situ reactor for gas phase catalysis [3]. This cell, shown schematically in Figure 1F, allows the reproducible and destruction-free mounting of standard TEM grids loaded with the electrocatalyst material that act as the working electrode, at the same time minimizing undesired currents from any external elements. Counter and reference electrodes can be added as well, forming a three-electrode setup suited for batch or flow measurements. The cell can be operated under full exclusion of air, making it suitable for a variety of different systems, such as oxygen evolution/reduction as well as the aqueous or non-aqueous CO2 reduction reaction.

The identical location imaging approach, especially the quasi in situ cell presented here, not only enables morphological, structural and electronic studies of versatile electrochemical reactions under inert and clean conditions, but it can also be used to verify in situ experiments conducted with liquid phase holders as, in a quasi in situ experiment, the electrochemistry is not influenced by the electron beam.