A variety of crystalline specimens have been analyzed by EBSD in a table top SEM. Despite of a small specimen chamber, limited specimen movement, low beam current and acceleration voltage EBSD acquisition can be performed and subsequent off-line indexed by several EBSD indexing software versions.

However, by optimizing the SEM- and EBSD detector parameters a variety of specimen types can be characterized by EBSD in a table top SEM. In this experiment metallic specimens (nickel and duplex stainless steel), a ceramic (alumina) specimen, part of a large grain silicon wafer and a geological specimen (iron oxides) have been investigated in a Hitachi table top SEM, TM4000 Plus. The electron backscatter patterns (EBSP) were acquired with a compact NORDIF EBSD detector and streamed to the HDD on a lap top PC by use of  NORDIF 3 EBSP acquisition software. The specimens were mounted on a 70° pretilted specimen holder, Figure 1. The accelerating voltage was 15kV which is maximum for this table top SEM, the operating mode was set to EDX mode, to get the highest available probe current. All specimens were analyzed in low vacuum mode since high vacuum mode was not an option for this table top SEM. The EBSD camera frame rate was 100 frames per second for all specimens except for the alumina specimen which had a frame rate of 75, the pattern resolution was 96 x 96 pixels. To improve signal to noise ratio on-line averaging was applied. In the Table the working distance, step size and the analysed area for all specimens are listed. The EBSPs were indexed off-line by EBSD software: EDAX/TSL (OIM), EMsoft [2] and ATEX [3]. The first one is a commercial- and the latter two are free software. With the open-source electron microscopy software package EMsoft, the acquired patterns are compared to a dictionary of dynamically simulated patterns, projected from the master pattern onto the detector, to determine the orientation and phase, called dictionary  indexing (DI). An example of a ferrite master pattern at 15 kV is shown in Figure 2. In Figure 3 Inverse Pole Figure (IPF) -, Phase (P)- and IPF+Quality (IPFQ) maps are shown for all specimens.

As can be seen from the maps in Figure 3 EBSD mapping can be performed from various types of specimens in a table top SEM with a small specimen chamber. 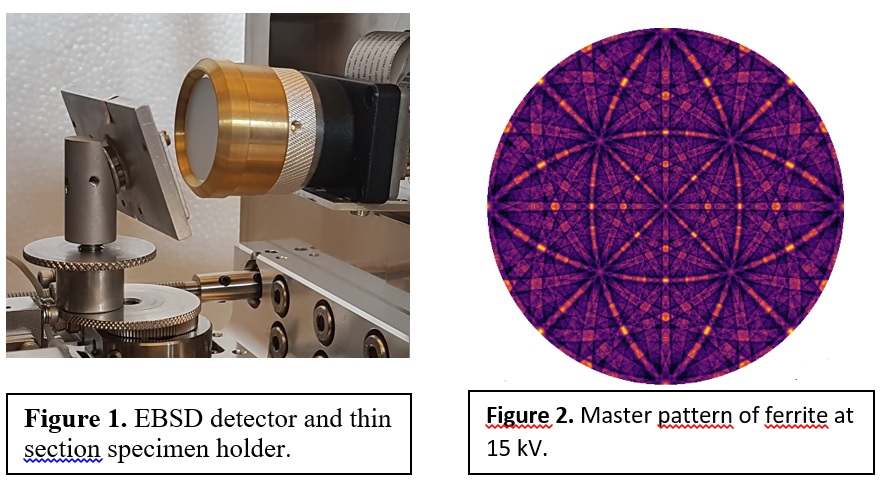 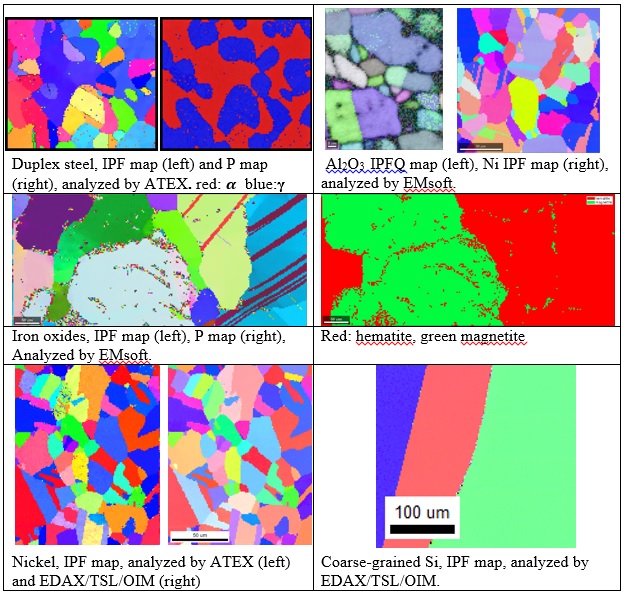