Quartz is a piezoelectric mineral found in many types of rocks. When a stress is applied to a piezoelectric crystal the electric polarization is changed, while an applied electric field can induce a strain in such a crystal. Piezoelectricity is an anisotropic property: the magnitude of the induced strain depends on the crystal orientation with respect to the direction of the external electric field. The motivation for this study was to investigate if an electric field applied to a rock with high quartz-content could modify the quartz microstructure.

In this study, granite was exposed to an alternating electric field. We investigate the effect on the microstructure using scanning electron microscopy electron backscattered diffraction (SEM EBSD) of exposed and unexposed samples. Two discs of diameter 20 mm were cut out from a core of Kuru Grey granite (composed of approx. 35% quartz, the rest mainly feldspars and a small amount of mica). The discs were polished down to a thickness of approximately 1.5 mm. One sample was exposed to an alternating electric field (1 kHz) for 10 minutes by placing it between two electrodes connected to a voltage supply. The voltage was chosen such that the field was 2 kV/mm. Unexposed and exposed discs were then polished for EBSD and coated with a thin layer of carbon. SEM was performed on a Hitachi SU-6600 SEM with a Nordif EBSD system. The step size used was 2 µm. EBSD patterns were indexed using TSL OIM software. The orientation data was then analysed using MTEX, which also allows calculation of piezoelectric properties based on crystal orientation [1].

Inverse pole figure maps are shown in Figure 1(a,d) of the unexposed and exposed granite sample. Only the quartz is shown. In both samples, the quartz consists of large grains with internal deformation, and smaller strain-free recrystallized grains. This can be seen in the kernel average misorientation (KAM) maps in Fig. 1(b,e). Dauphiné twins are also found in both samples. There is no discernible difference in the level of local misorientation in the two samples. 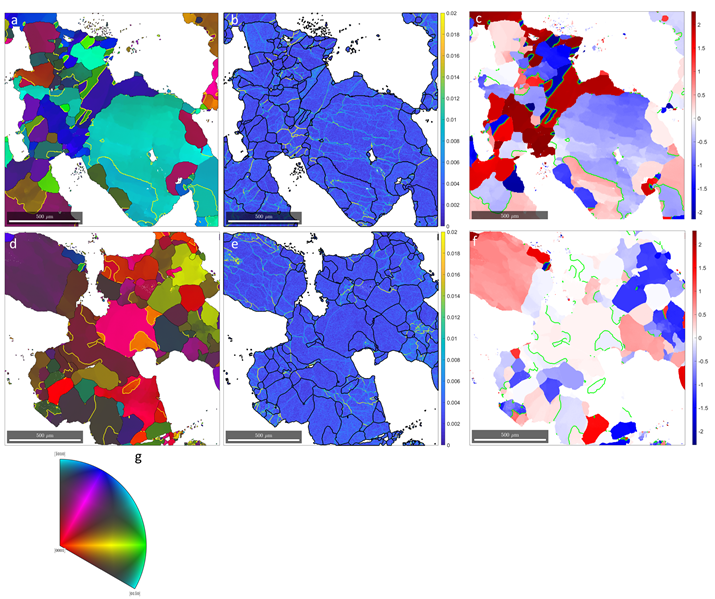 [3] The authors gratefully acknowledge funding from the Research Council of Norway under grant number 280755.