Surface plasmons are oscillations of the charge carriers at interfaces between dielectric media of opposing permittivities such as between (noble) metals and air. They strongly couple to electromagnetic (e.g., optical) fields forming a surface plasmon polariton i.e. propagating plasmon waves. On the other hand a spatial confinement of surface plasmons (e.g. in nanoparticles) leads to standing plasmon waves, so-called Localized Surface Plasmons (LSPs). They are characterized by strong and localized electromagnetic field enhancement, which is strongly sensitive to the geometry and composition of the nanoparticle (NP) and the environment. These properties of surface plasmons are exploited in various applications such as wave guides, enhanced optical sensing, or improved solar cells. Thereby, long chains of coupled metallic NPs are of special interest because they can form highly dispersive plasmon bands which pave the way to strong ballistic plasmon wave transport.

The behavior of strong coupled NPs with homogeneous particle arrangement is understood well [1, 2]. Recently, however, heterogeneous NP assemblies consisting of different NP species, sizes, shapes, distances, etc. came into focus. The additional degree of freedom in these configurations (comparable to the jump from monoatomic to polyatomic molecules or crystals) in principle allows to generate more complex plasmon modes such as multiple plasmon bands, tuneable band widths, or topological states. Thereby, one challenge is the precise arrangement of the NPs with respect to their distances and patterns. A second challenge is the characterization and description of the emerging plasmon modes in the heterogeneous assembly.

Here we report on the surface plasmon resonances in heterogeneous chains consisting of Ag and Au NPs. To fabricate these chains we used a wrinkled template for directed self-assembly of highly crystalline gold and silver nanospheres. In order to reveal the spatial and spectral distribution of the plasmonic response at highest resolution we employed state-of-the-art STEM EELS on a monochromated Cs-corrected FEI TITAN3 TEM with an energy resolution of 70meV.

We found a rich number of modes in the heterogeneous chains ranging from LSP modes occurring in single gold and silver spheres respectively over hybridized modes which arise from coupling between single NP modes up to bulk modes (see Fig. 1). In particular the [4px]=pxpxpxpx modes observed in the homogeneous chains (Fig. 1a, d) arise from the coupling of the [px] modes of the individual spheres, whereas the [4s] modes consist of only weakly coupled [s] modes. Here, we used a notation similar to that of atomic orbitals (i.e., s, px, py, pz, … orbitals). Using that nomenclature the modes observed in the heterogeneous systems can be identified according to their dominant single NP characters. For instance the cyan colored mode (at 2.5eV loss energy) in Fig. 1b consists of two [s] modes located at the terminating Au single spheres and the coupled  [2px,1] mode of the two silver spheres (1=number of nodes), which have the same excitation energy. This effect may lead to a resonant amplification of the participating modes. Our results suggest that the enlarged degrees of freedom in heterogeneous assemblies allow to fine tune plasmonic submodes located on different constituents such to create resonant amplification and hence a rich mode structure. To further exploit these effects for application, e.g., in wave guides, the excitation energy of the different modes can be tuned deliberately by varying the composition of the assembly (size of the spheres and the gaps in between). 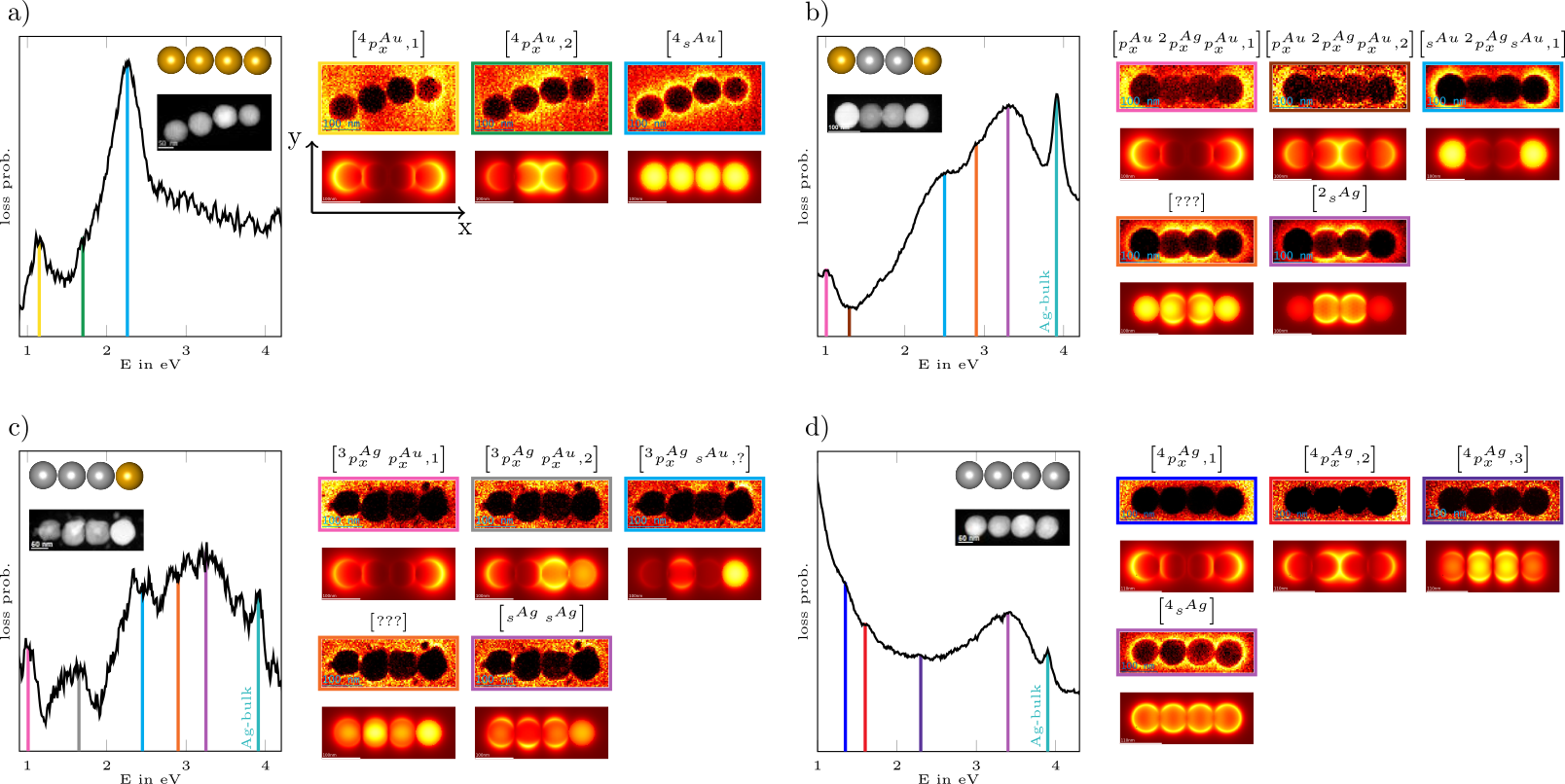 [4] We received funding from the Deutsche Forschungsgemeinschaft (DFG, German Research Foundation) under Germanys Excellence Strategy–EXC2147/1 ST0232019 "Cluster of Excellence on Complexity and Topology in Quantum Matter ---ct.qmat". We acknowledge funding from the European Research Council (ERC) under the Horizon 2020 research and innovation program of the European Union (grant agreement number 715620).