The emerging of Moiré superlattices in graphene based heterstructures have paved the way to the observation of a variety of phenomena in condensed matter physics [1][2][3]. To fabricate such structure, two nearly identical crystals are overlaid with small twisted angle which is mainly achieved by dry transfer method [4]. Alternatively, graphene derivatives with different functional groups such as OH and F synthesized having a different lattice constants as compared to pristine graphene could be used [5]. By transferring such functionalized graphene to pristine graphene, a bilayer graphene system would be formed containing a Moiré pattern. However, the conventional dry transfer technique is inapplicable for the rippled surface of such graphene derivatives since it is difficult for match such surface to the atomically flat surface of pristine graphene. In addition, the contamination layer between the two layers from ambient environment is unavoidable which results in a low yield in the fabrication of such structures [4]. Therefore, a new approach is necessary to overcome these problems for the fabrication of bilayer graphene Moiré superlattices.

Herein, we report a technique to fabricate a new generation of Moiré superlattices using C2F/graphene bilayers obtained by the technique of beam induced fluorination [6]. Bilayer graphene exfoliated from highly oriented pyrolytic graphite (HOPG) with typical Bernal stacking is irradiated by electron beam while being exposed by XeF2 gas (Fig. 1). The fluorination concentration is tunable by optimizing electron beam irradiation condition and the rectangular Moiré patterns can be observed by atomic force microscope after a saturated fluorine concentration. Such rectangular Moiré superlattices have not been reported before. Furthermore, the symmetry of the Moiré superlattices indicates that the CF2 structure of topmost layer is the boat configuration which is illustrated in Fig. 3. 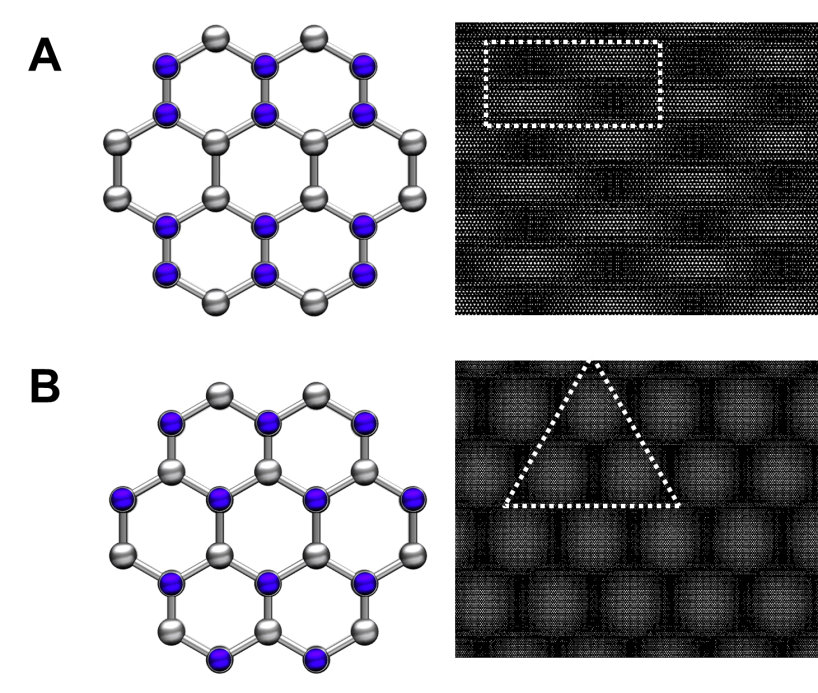