Direct correlations of structure and properties at individual nanoscale facets are needed to better understand the role of oxide nanoparticles as supports and active phases in catalytic applications. Here, we show how a combination of in situ transmission electron microscopy (TEM) imaging and electron energy loss (EEL) spectroscopy can resolve vanadium arrangement and oxidation state at individual nanoscale facets of an anatase TiO2 support under catalytically relevant conditions. We find both surface structure and oxidation state to depend on the support-facet structure.

Surfaces of oxides differ in structure and stoichiometry and should therefore also differ in properties, which could translate into differences in catalytic activity. However, measurements that are able to directly correlate these are few. We focus on VOx/anatase-TiO2 catalysts which are of relevance in several industrial applications, including selective catalytic reduction (SCR) of NOx emissions. We have previously used TEM-mode imaging and EEL spectroscopy to correlate surface structure with the overall vanadium oxidation state. The measurements were conducted with the VOx/TiO2 in a differentially pumped gas cell,[1] which allowed shifting between reaction conditions relevant to SCR catalysis.[2] However, the relation between oxidation states and individual surface facets could not be resolved. Here, we turn to measurements in STEM-mode and additional detailed structural analysis to address these issues.[3]

Recording EEL spectra from points on the VOx/TiO2 nanoparticles is not advisable as the effective electron dose rate will exceed the threshold for beam-induced alterations for VOx.[2] Instead, we use the following method to distribute the dose over larger areas on the nanoparticles[3]: first, high-resolution TEM micrographs are recorded in order to identify the crystallographic character of the exposed surface facets (Figure 1a). The microscope is then switched to STEM mode, the probe current is reduced, and a high-angle annular dark field (HAADF) image is acquired (Figure 1b). Through comparisons with the HRTEM image, we can distinguish and select suitable sub-areas containing specific surface facets. Finally, EEL spectra are recorded while continuously scanning the focused STEM probe within the selected areas, yielding an integrated signal for the corresponding surface facet. To detect the relatively small shifts in V L-edge energy loss that are arise from changes in vanadium oxidation state, we use the Ti signal from the support particle as an internal reference. Furthermore, the spectra are acquired as a series of short exposures that are aligned and dark-current corrected for enhancement of signal-to-noise ratio.

The STEM-EELS measurements reveal systematic differences in oxidation states between the facet types. Figure 1c shows two example spectra recorded at 300 °C and O2 (10-4 mbar) where the {001} facets appear more oxidized than the nearby {10l} l> 0 facets, as evident from their higher peak V-L3 energy loss. This difference is consistently found for all nanoparticles investigated and remains at higher oxygen partial pressures, as well as in NO/NH3 gas mixtures relevant for the SCR reaction. Further analysis using reconstructed exit-wave phase images[1] reveal also structural differences between the facet surfaces developing in the different gas environments.[2-4]

The surface redox dynamics of the VOx/TiO2 catalyst can be favourably compared with density functional theory calculations to better rationalize catalytic test results. The presented approach should be generally applicable to uncover structure-sensitive surface redox properties in other oxide catalysts. 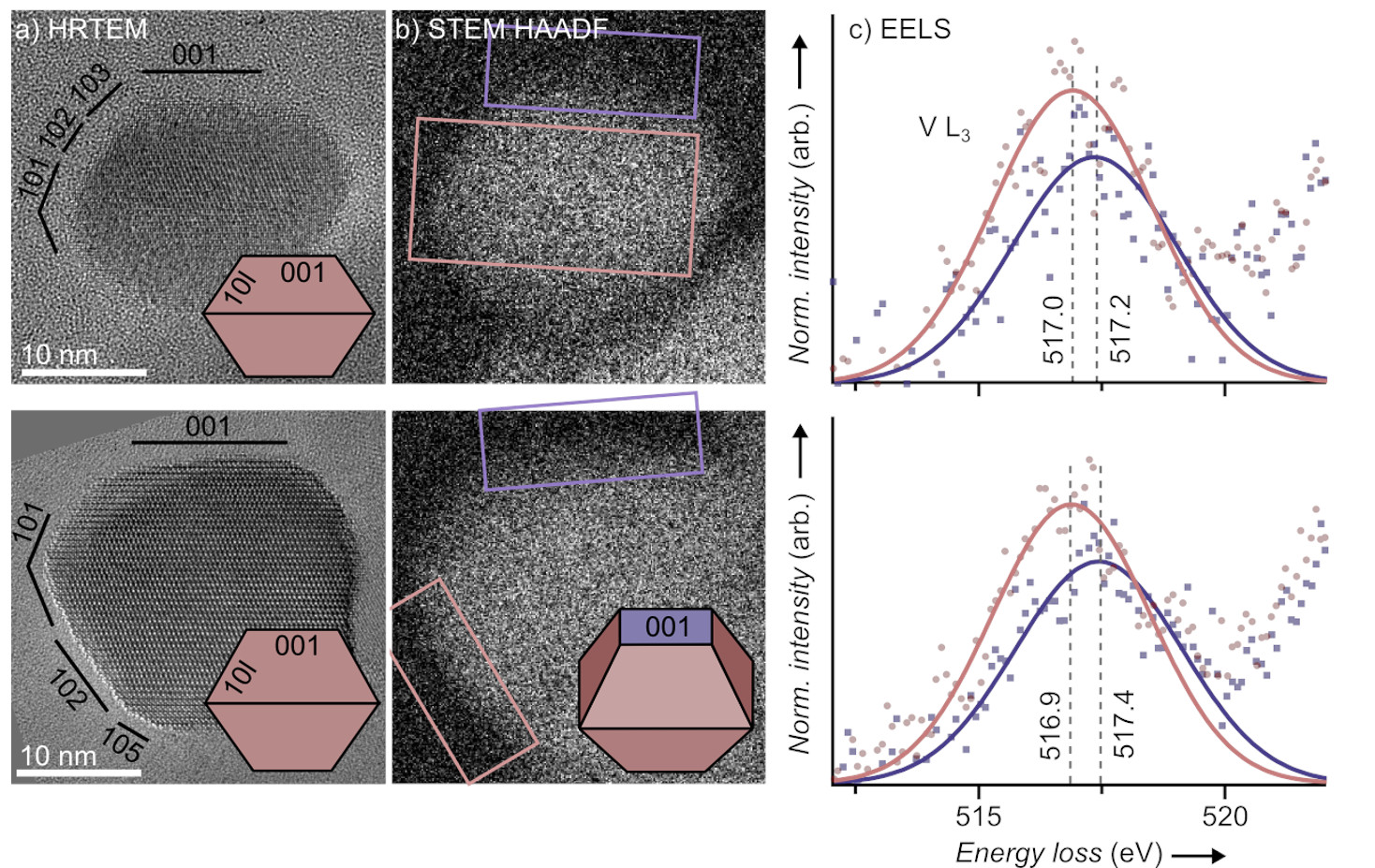 Figure 1. Facet-specific oxidation state measurements. (a) High-resolution TEM micrographs of VOx/TiO2 nanoparticles in [010] orientation, recorded at 300 °C in an O2 (10-4 mbar) environment. Surface facets are marked and indexed along the perimeter of the particles, and the overall morphology is shown by the inset illustration. (b) Low-dose-rate STEM-HAADF images of the same particles with boxes indicating the areas scanned on {001} and {10l} facets for recording EEL spectra. (c) Vanadium-L3 regions from the two spectra from each particle (background subtracted and normalized to surface area) showing a difference in peak energy loss at {001} and {10l} facets, indicating that vanadium is more oxidized on the former.