Here we investigate the fundamental mechanisms behind the precipitation in the non-equiatomic nanocrystalline compositionally complex alloy (CCA) Mn10Fe27Co26Ni27Cu10. For this, an in-situ transmission electron microscopy (TEM) approach was employed to observe the real time formation and growth of B2 precipitates in the parent fcc matrix. Additionally, atom probe tomography (APT) was performed to understand the local segregation characteristics at individual grain boundaries.

Compositionally complex alloys (CCA) or high entropy alloys (HEA) are an emerging class of materials with distinct design approaches and diverse potential applications. An interesting approach to develop CCAs, lies in deviating from traditional equiatomic compositions and coarse grained single phase microstructures [1] . In this context the nanocrystalline alloys have exhibited outstanding mechanical properties in contrast to their coarse-grained counterparts [2]. Here, we exploit the combined strengthening benefits from both nano-sized grains and a second phase precipitating in the non-equiatomic CCA Mn10Fe27Co26Ni27Cu10. To investigate the formation and dissolution mechanism of the second phase we employed in-situ heating protocols in a transmission electron microscope (TEM) and further performed atom probe tomography (APT).

The alloy Mn10Fe27Co26Ni27Cu10 was cast using electromagnetic levitation melting and homogenized at 1100 ºC for 12 hours to yield a single-phase microstructure. The alloy was then subjected to a severe plastic deformation using high pressure torsion (HPT) to achieve a nanocrystalline microstructure. Specimens from the nanocrystalline sample were prepared by focused ion beam for TEM and APT analysis. For in-situ heat treatment the specimens were transferred to a MEMS based heating chip (Protochips). Grain orientation analysis was carried out simultaneously with in-situ heating using automated crystal orientation mapping (ACOM). Additionally, elemental analysis in combination with in-situ heating was also performed using low energy filtered TEM (EFTEM) series. To elucidate thin film and beam effects during the in-situ studies, APT and TEM was done on on both the in-situ sample that was heat treated and an ex-situ sample heat treated under the same conditions.

The initial orientation and phase maps show that after HPT, the sample is a nanosized single disordered FCC solid solution. The in-situ heat treatment in the TEM of the HPTed sample reveals the formation of a new B2 phase as shown in Fig. 1 (a) and (b). Further analysis showed an increase in the phase fraction of B2 precipitates with increasing temperature up to 380 oC. A reduction in the phase fraction of B2 was seen with a further increase in temperature indicating the dissolution of the B2 precipitates. Our analysis indicates that the B2 phase exhibits both Kurdjumov-Sachs (K-S) and Nishiyama-Wasserman (N-W) orientation relationship with the fcc matrix. The growth and dissolution of the precipitates is found to follow an Arrhenius type behavior. Interestingly, the fcc grain size remains unaffected until the onset of the dissolution of the B2 precipitates. This shows that the B2 phase has a pinning effect on the fcc grain boundaries, which avoids grain growth even with an increase in temperature in these nanocrystalline samples.

To evaluate the changes in the chemical distributions during the heat treatment, in-situ heating in combination with EFTEM was performed. At 250 ºC, segregation of Co, Ni and Cu was collectively observed on the grain boundaries along with the depletion of Fe and Mn. A further increase in temperature to 320 ºC, the Fe-Co precipitates formed as shown in Fig. 1 (d) and (e) while Ni and Cu remained segregated at the grain boundaries.

APT of the ex-situ heat treated sample also shows similar segregation and precipitation behavior. The reconstructed APT volume highlights Fe-Co precipitates in dark blue Figure 1. (c). Three distinct segregation profiles were observed from APT. A co-segregation of Ni and Cu at the grain boundaries was seen. Only Ni rich segregation with a small Mn enrichment was also seen at the boundaries. Finally, along all the precipitates a sole Cu rich region was observed, likely from the rejection of Cu from the B2 precipitates.

This study investigated the precipitation of a Fe-Co rich B2 in a non-equiatomic HEA. The mechanism behind the precipitation were analyzed using in-situ annealing in TEM. APT revealed varying chemical segregation at the grain boundaries in agreement with the TEM analysis. 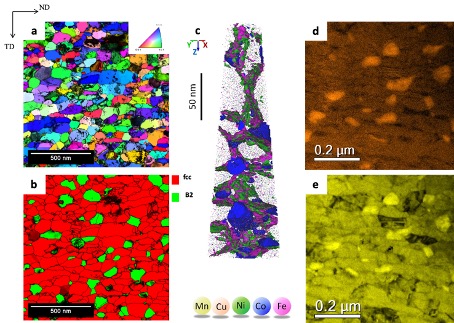 Figure 1 a) Orientation map of the in situ TEM heat treated sample at 360 ºC b) corresponding phase map indicating formation of B2 phase during heat treatment c) APT reconstructed volume of the ex situ heat treated sample highlighting various segregations at GBs and the formation of B2 precipitates d) low loss EFTEM image of Fe at 360 ºC e) low loss EFTEM image of Co at the same temperature.