Transmission electron microscopy (TEM) combined with micro-electro-mechanical systems (MEMS) can be used to directly observe the dynamic behavior of materials under different stimuli [1]. For example, in-situ microheaters enable researchers to investigate the thermal stability of heterogeneous nanoparticles [2]. Hereby, accurate knowledge of the local temperature during the TEM experiments is critical. However, external-based temperature calibrations using Raman spectroscopy [3] or infrared pyrometry [1,3] might show a deviation in comparison to the actual temperature when the nanochip is used inside the TEM. Together with the possible errors introduced by the aforementioned calibration procedures, the temperature inhomogeneity that can be intrinsically present in a microheater design also limits its temperature accuracy. Moreover, these temperature measurements are usually available at the scale that is too large for tracking the local temperature of nanoparticles on a nanochip. Additionally, when using in- situ microheaters, the nanoparticles are deposited on the SiNx film of the nanochip and the local heat transfer from the SiNx film to the nanoparticles remains unclear [4]. Here, we propose a method to measure the local temperature of the individual nanoparticle during in-situ heating experiments by using quantitative high-angle annular dark-field scanning TEM (HAADF-STEM) tomography.

In this work, and for comparative purposes, we analyze the difference between the old and new versions of the nanochips designed by DENSsolutions: (a) the double spiral shaped microheater and (b) the circular spiral shaped microheater, respectively. In both cases, the temperature is controlled using the resistance of the complete microheater, resulting in a single temperature value that corresponds to that of the central windows. Consequently, the new version of the nanochip (circular shaped microheater) aimed at maximizing the viewable area that is at a homogenous temperature. By investigating the dynamics of heating-induced alloying in [email protected] core-shell nanorods (original structure illustrated in Figure 1a), we can accurately estimate the local temperature of the individual nanoparticles as well as studying the possible thermal gradients within the different windows of both nanochips. This idea is based on the assumption that nanoparticles with well-controlled size, composition and morphology would yield a similar alloying behaviour [5].

Recently, it was shown that the degree of alloying in core-shell nanoparticles can be calculated from the histogram of intensities of a 3D reconstruction based on fast HAADF-STEM tomography [6]. Compared to  2D HAADF-STEM images, which contain both thickness and elemental information [7], the contrast in the orthoslices through a 3D reconstruction only contains information on the elemental distribution inside the nanoparticles. Therefore, the histogram of voxel intensities inside the nanoparticle can be used to rebuild the 3D elemental distribution (Figure 1b-d). The spread of the voxel intensities follows the dynamics of the alloying, which was used to quantify the alloying states (Figure 1e-f). In this manner, we investigated the local temperature difference (and thus temperature homogeneity) across the different windows of both nanochip designs (i.e. the difference between central windows and the windows close to the edge of the microheater). A different alloying behavior was found for nanoparticles deposited on a double spiral shaped microheater (i.e. old version). Our results indicate a temperature difference of more than 20 ℃ for different windows (Figure 2a). On the other hand,  the circular spiral shaped microheater (i.e. new version) yields a much better temperature homogeneity (Figure 2b) and consistent alloying dynamics of the nanoparticles were observed. This clear improvement on the circular spiral shaped microheater was expected, as the linewidth of the metal lines was designed to gradually increase from the edge towards the center of the microheater. This compensates for the thermal gradient that otherwise occurs in the old design because the varying linewidth of the new design provides a constant and stable decrease of resistance towards the middle point of the microheater so that more Joule heating happens in the outer metal lines of the spiral and less in the middle. Such high homogeneity over the entire microheater’s area, consequently, gives the new design the capability to provide a larger surface for the increased viewing area [8]. 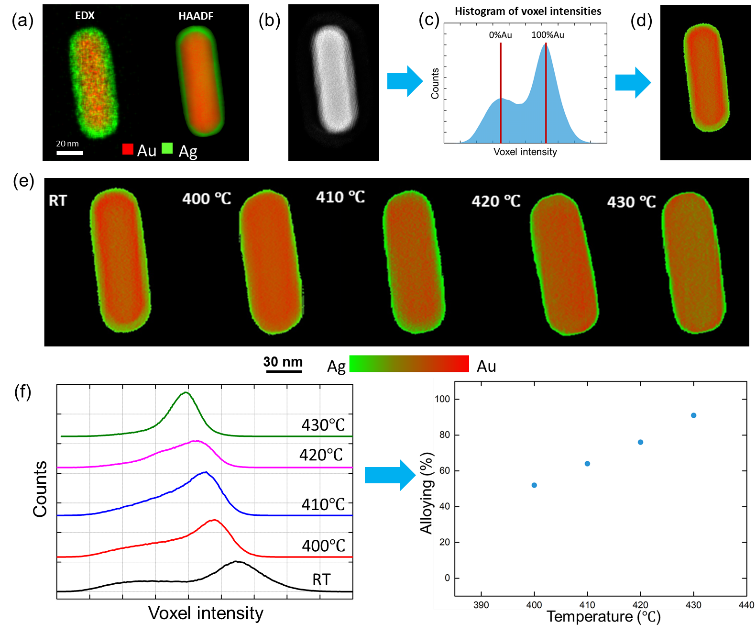 [8] This work was supported by the Marie Skłodowska-Curie Innovative Training Network MUMMERING (Grant Agreement no. 765604). The authors acknowledge financial support from the European Commission through project fundings.