New scanning transmission electron microscopy (STEM) imaging techniques that are sensitive to the azimuthal variation of the convergent beam electron diffraction (CBED) pattern are gathering a rapidly growing interest. These imaging techniques include differential-phase contrast (DPC) STEM and more general four-dimensional (4D) STEM,[1],[2] which are realized by using either segmented annular detectors or pixel-array cameras. These novel detection strategies allow for exploring additional contrast mechanisms that hitherto have been buried by the azimuthal integration of conventional annular detectors. The key point for the success of such new techniques relies on the correlation between the variation in the intensity distribution within the transmitted disk and relevant sample properties, like e.g. electric/magnetic fields in the specimen plane.[3]–[11]

In previous work, we observed a variation of the atomic-resolution DPC signal in differently polarized regions of a complex ferroelectric structure in a Ca-doped BiFeO3 thin film.[12] This finding demonstrated that high-resolution DPC-STEM is sensitive to polar fields in ferroelectric materials and they appear as asymmetries of the electric field detected by DPC. However, a complete understanding of these first experimental observations requires a more complex description than the rigid-shift model[13],[14]. In particular, understanding the origin of the atomic-resolution DPC contrast and its applicability to relevant materials – e.g. the DPC sensitivity limits, the role of dynamical scattering and specimen tilt – still remain open challenges.

In this study, we present a theoretical work based on multislice simulations[15] in which we introduce the contribution of the ferroelectric polarization in the calculation of the DPC-STEM signals by means of a mean-field approach. We perform our study on the BiFeO3 system, which is the archetype multiferroic material and is the object of the first experimental studies by DPC-STEM[12] and 4D-STEM[16]. Firstly, we discuss how to include the contribution of the ferroelectric polarization in the multislice algorithm preserving the potential periodicity. Although the most intuitive way to take into account the polar fields is to add a term in the potential slices used in the multislice calculations (Fig. 1a), the additive slope describing the mean polar field breaks the potential's periodic boundaries that are strongly required by the Fourier Transform (FT)-based multislice calculations. As an alternative approach, we developed a modified algorithm that applies the effect of the mesoscopic polar field as an infinitesimal beam tilt in the free-space propagation step (Fig. 1b).

After introducing our custom multislice algorithm, we compare the simulations of high-resolution DPC signals in the presence and absence of a mesoscopic polar field. The effects of sample misorientation are also addressed by performing the simulations for crystals structures at a variable tilt angle with respect to the electron beam propagation direction. In particular, we performed simulations of thickness and defocus series for different values of mesoscopic polarization (P = 0, 20, 40, 60, 80, 100 μC cm-2) and specimen tilt angles (t = 0, 0.6, 1.2, 1.8, 2.4, 3.0, 3.6 mrad).

As an example, Fig. 2 shows a comparison of the DPC amplitude simulated for a specimen thickness of z = 20.54 nm and defocus Δf = -174 Å, respectively for the (a) unpolar specimen, (b) polar specimen with P = 100 μC cm-2, (c) specimen tilt t = 1.8 mrad. The asymmetries in the detected atomic field amplitudes closely resemble the ones that have been reported in the first experimental observations.[12],[16] The effects of polarization and specimen tilt are qualitatively similar, however, the line profiles shown in Fig. 2d highlight the different trends for the Fe and Bi columns in the two cases, as the asymmetry of the Bi column potential increases more rapidly with respect to the Fe one in the polar case. On the contrary, in the case of specimen tilt the profiles of Fe and Bi atomic columns show similar trends.

We can further study the differences between the effects of polarization and specimen tilt by analyzing the corresponding simulated CBED patterns. The diffraction patterns were obtained averaging the CBED pattern over the different scan positions over one pseudocubic unit cell of BiFeO3. Fig. 3a shows the simulated diffraction pattern for the unpolar case. Fig. 3b shows the difference between the similarly obtained patterns for the polar (P = 100 μC cm-2) and tilted (t = 1.8 mrad) cases and the references (unpolar and untilted system). A clear variation of the center of mass of the transmitted disk occurs in both cases. The change in the diffraction pattern looks overall similar, but subtle variations in the line profiles (Fig. 3c and d) suggest that it is possible to discriminate between the mesoscopic polarization and specimen tilt by fitting the center of mass of the transmitted disk.

In conclusion, we present a modified multislice algorithm for simulating high-resolution DPC-STEM data for different values of polarization, specimen thickness, and specimen orientation. The results are in agreement with experimental data and demonstrate that DPC-STEM imaging is strongly affected by the polar state of the specimen, with a complex dependence on the specimen thickness and defocus. The subtle differences between the different effects of polarization and specimen tilt suggest that the use of a pixelated detector could help in discriminating between specimen polarization and tilt.

Fig. 1. (a) Effect of a uniform ferroelectric polarization on the potential slices for multislice simulations. An additive linear term induces a break of the periodicity of the potential slices. (b) Modified multislice approach including the interaction of the electrons with a transverse electric field in the free-space propagation as an infinitesimal beam tilt (θ). 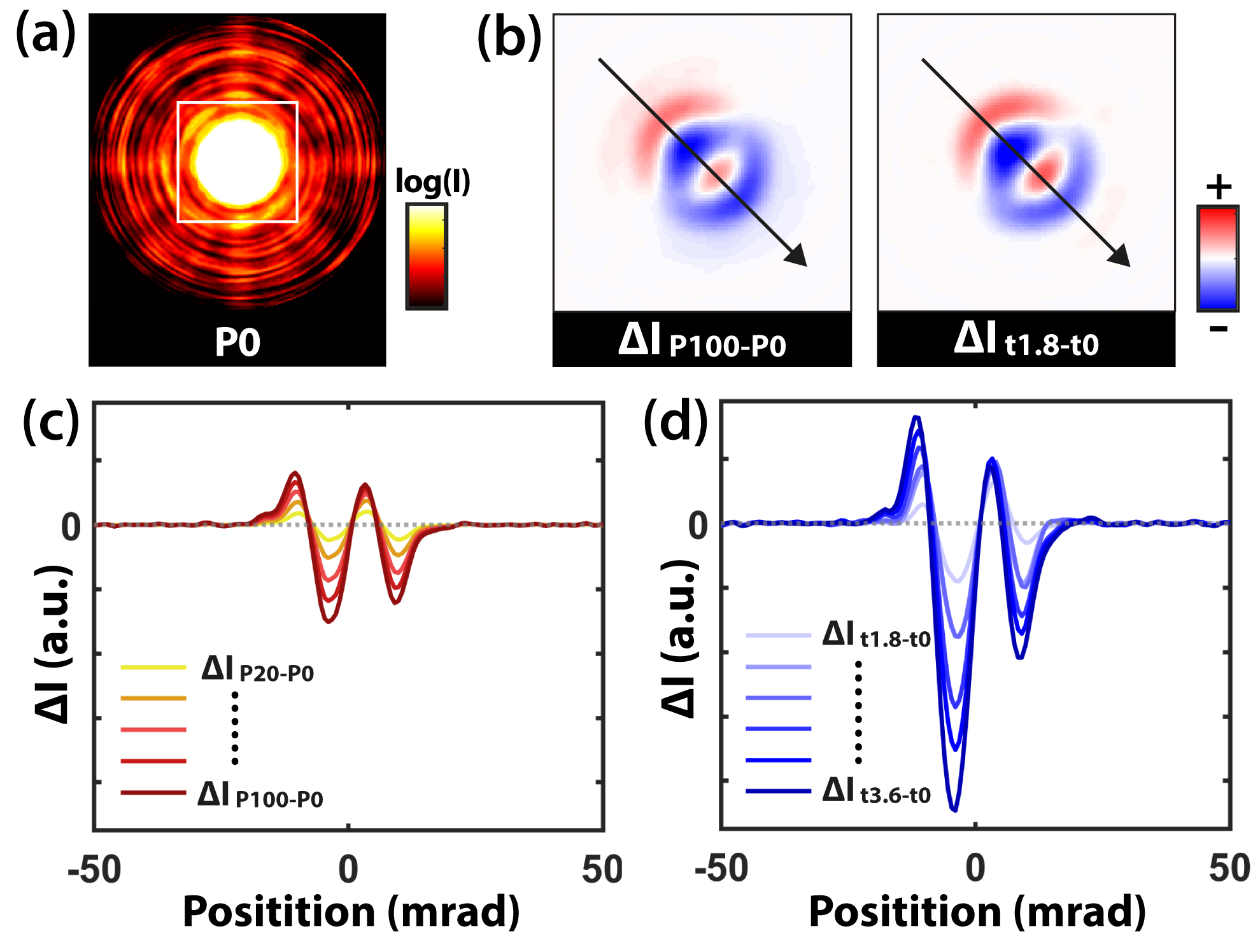 Fig. 3. (a) Simulated CBED pattern for the unpolar specimen (see text for details about specimen thickness and defocus). Difference of CBED patterns of the (b) polar specimen (P = 100 μC cm-2) and tilted (t = 1.8 mrad) with respect to the reference one. Comparison of line profiles for the different patterns for the (c) polar and (d) tilted cases, taken along the black lines.

[17] RE acknowledges funding from the European Research Council (ERC) under the EU's Horizon 2020 research and innovation program (grant No. 681312). MC and RE gratefully acknowledge funding from InnoSuisse under the project number 35839.1 IP-ENG.