Structural and electronic changes of Co3O4 spinel nanoparticles, which undergo a catalytic cycle, are investigated by scanning transmission electron microscopy (STEM) in combination with electron energy loss spectroscopy (EELS). A dedicated microreactor for liquid phase reactions and an inert gas transfer system enable to run a catalytic reaction on the very same sample without being exposed to air. Subtle changes in the crystallographic and electronic structure are then correlated to a specific catalytic treatment by identical location imaging and spectroscopy (ILIAS) using again inert gas transfer from the microreactor back to the microscope.

In heterogeneous catalysis, knowledge of the local structure and the chemical composition of the catalyst is of major importance. Fast electron beam techniques such as STEM in combination with EELS allow to uncover structural, compositional and electronic details with atomic resolution. To correlate these details to the catalytic function of the catalyst, operando and in situ approaches have been developed to study changes of the catalyst in real time. Nowadays, the use of different gases or liquids in combination with heating and biasing while measuring the amount of conversion is possible. However, the role of the electron beam and its interaction with the applied gases or liquids and the catalyst complicate the situation and hinder a clear interpretation [1].

Here we introduce a quasi in situ approach for liquid phase catalysis, where a solid catalyst (Co3O4 nanoparticles, Figure 1a) is studied converting liquid isopropanol to acetone. STEM-EELS is applied before and after catalytic operation in a dedicated TEM-grid microreactor (Figure 1b). Due to an inert gas transfer from the TEM to the microreactor and back, the sample is not exposed to air. In contrast to the operando approach, the quasi in situ approach keeps the defined conditions of an evacuated microscope column, while controlled catalysis is realized in the external microreactor, as previously shown for gas phase reactions [2]. Temperature and pressure are set using an infrared laser, while conversion of the liquid is monitored using a gas-tight syringe in combination with gas chromatography. Co3O4 spinel nanoparticles, purchased from Merck KGaA, are heated to 800°C to remove carbonates.

Figure 1a shows Co3O4 spinel nanoparticles before catalytic operation (left). A high resolution EELS scan across the surface of a single particle, indicated by the green box, highlights a slight change of the cobalt L3,2 edge for the topmost atomic layers (right). The increased peak splitting as well as the increased Co-L3 to Co-L2 ratio indicate a change from Co3O4 to CoO. Figure 1b depicts the liquid phase TEM grid microreactor. The drawing (left) shows a cross section of the reactor, including the actual reactor (blue), the cover (gray) and on top a mounting for the infrared laser optics (copper). There is an input line, an output line and a connection for the thermocouple (middle) to accurately monitor the temperature close to the TEM grid (right). First heating experiments in nitrogen at mild temperatures of 250°C and inert gas transfer, show that steps and terraces are formed close to the particle surface. This may have an important impact on the catalytic function of these particles, and is in strong contrast to often assumed ideal crystal terminations [3].

STEM-EELS analysis of Co3O4 spinel nanoparticles in combination with a novel quasi in situ microreactor for liquid phase catalysis and an inert gas transfer enables to study crystallographic and electronic changes with atomic resolution before and after catalytic operation. In contrast to operando approaches, electron microscopy in an evacuated column is decoupled from the catalytic treatment in the external microreactor. This avoids misinterpretation of the results due to e-beam interaction with the gas/liquid in combination with the catalyst (beam damage). This approach is an important step forward to understand the function of a catalyst, getting a detailed knowledge of the local crystallographic and electronic structure and their changes due to catalytic operation. 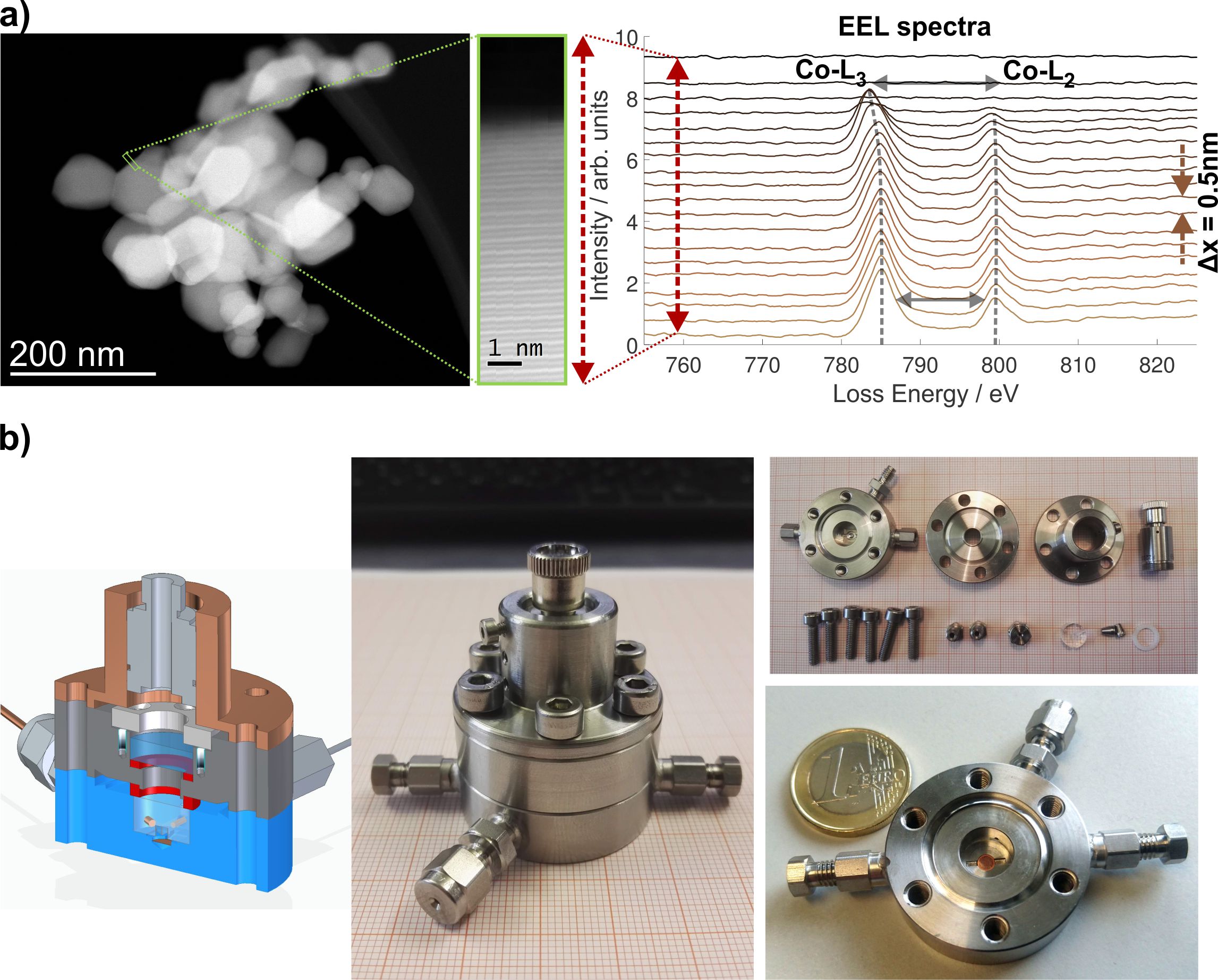