Image based analysis of reproductive toxicity caused by Organochlorine mixtures

The effects of an individual chemical have been studied well by the researchers and thus information regarding their toxicity profiles are widely available in the literature. Even, most of the regulations in the European Union (EU) are also based on the testing of single chemicals, thus overlooking the outcomes of mixture interactions occurring during environmental exposure. This is the case of organochlorines that are common environmental contaminants, and we regularly get exposed to the mixtures. Their exposure is highly discussed reason for male sub/infertility which has now become a global issue. Therefore, there is a need to develop a framework for assessing the mixture toxicity, consisting of multiple steps. There are studies confirming an association of individual organochlorines or their mixtures with adverse effects on male reproductive system, however image- and mechanistic-based studies dealing with organochlorine mixtures are scarce [1,2]. Screening toxic effects of a huge number of chemical mixtures in vitro is a central attraction nowadays. Therefore, there is a need to develop high-content analysis (HCA) approaches to gain the information regarding the mechanisms and adverse outcome pathways (AOP) involved from the molecular initiating event (MIE).

To study the effects of organochlorine mixture on male reproductive system, we developed a semi-automatic and versatile battery of the tests using different in vitro models. Firstly, we studied endocrine-disrupting potential of an environmentally relevant organochlorine mixture using reporter gene assays assessing the interactions with nuclear receptors.  Secondly, we focused on direct effects of mixture on testicular cells, namely on Leydig (TM3) and Sertoli (TM4 cells with different functions in male reproductive health. We performed cell viability assays using 3-(4,5-dimethylthiazol-2-yl)-2,5-diphenyl tetrazolium bromide (MTT) and a combination of three indicator dyes – (alamarBlue, CFDA-AM, and neutral red). To study the inhibitory effects of the mixture on cell-cell communication, we performed the improved multiparametric scrape loading-dye transfer assay (SLDT) [3] for a simultaneous high-throughput analysis of gap junctional intercellular communication (GJIC), cell density and viability. Imaging was performed on two microscopy platforms (Tissue Gnostics TissueFax system and Biotek Cytation 5) as depicted in figure 1 and 2. The data obtained from these two microscopy platforms were analyzed using Image J (Macro) and Gen 5, respectively. To check if exposure to this mixture was leading to the extensive formation of lipid droplets in the testicular cells, we stained the cells with BODIPY and Hoechst for the quantification of lipid droplets and the number of nuclei respectively.

Regarding endocrine-disrupting potential of this organochlorine mixture, strong antiandrogenic and weak estrogenic effects were observed in a dose-dependent manner. The mixture also directly affected testicular cells. In addition to dose and time dependent cytotoxicity in both Leydig TM3 and Sertoli TM4 cells, the organochlorine mixture also rapidly deregulated testicular gap junctional intercellular communication (GJIC) in vitro in both TM3 and TM4 at non-cytotoxic concentrations.  Our set-up allowed quick and convenient multiparametric GJIC assay (different microscopy and image analyzing platforms). The analysis of communicating and not-communicating cells was carried out with open-platform Image J using in-house developed macro.  Additionally, Gen 5 provided us the automatic platform to count dead and all cells for assessing cell density and viability. Using Biotek Cytation 5 and Gen5 pipeline, we were able to evaluate also number of lipid droplets in an automated manner. To conclude, we developed and optimized a versatile battery of imaged-based assays for high-content analysis of in vitro reproductive toxicity it can be highlighted from our results that organochlorine and their mixtures could be a potential etiological agent contributing to reproductive dysfunction in males through an impairment of the testicular GJIC. 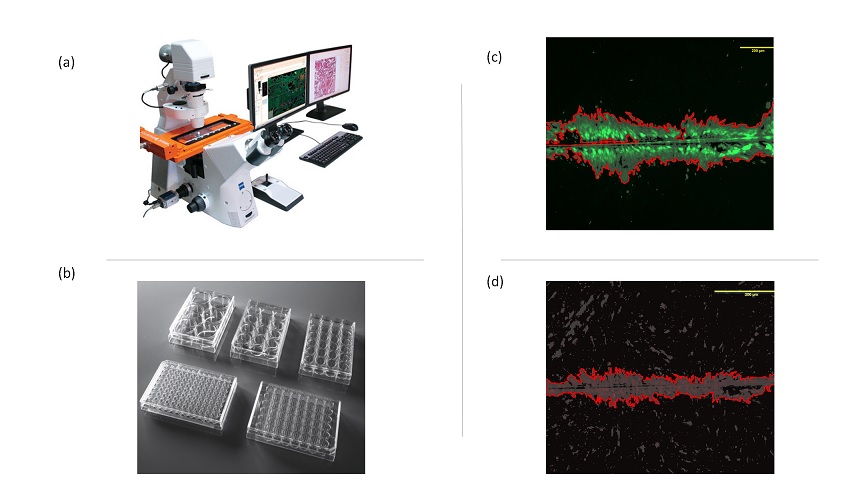 Figure 1: Schema representing the set-up for monitoring level of cell communication in vitro using microcopy platform (TissueFax) (a) capturing images (b). This set-up can be applied for various multiwell plates (c), ready for high-throughput application.  Image-based analysis of cell communication is fast and objective and uses in-house developed macro in ImageJ (c and d). 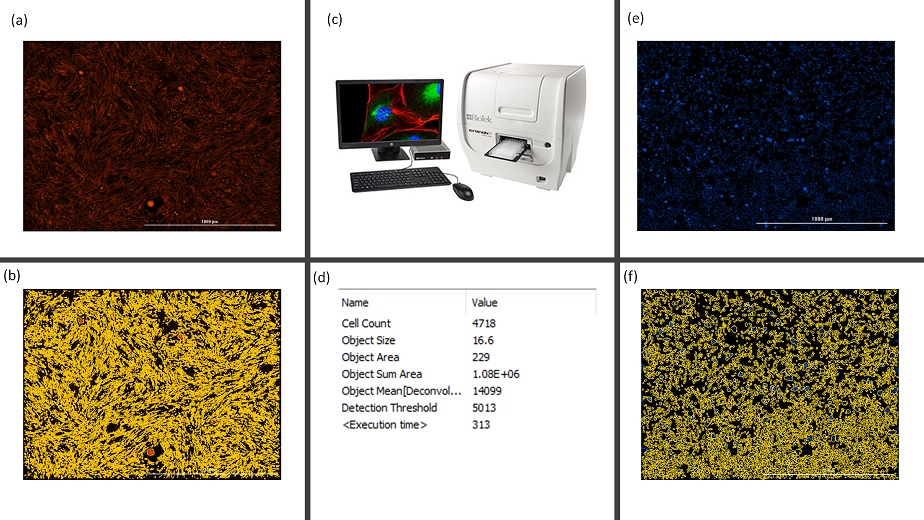 Figure 2: Schema representing the set-up for monitoring cell density and viability using microcopy platform (Cytation 5, c). Images showing the dead cells (a) and cell density (e) after treatment with 10% of ethanol. Images depicting the automatic cellular analysis performed using Gen 5 (b and f) (d) Results obtained from the analysis of image (e) showing number of cells per FOV (b).