In rare-earth magnets, the interaction between magnetic domain structures and microstructures such as grain boundary phases has been investigated for many years to improve their coercivity [2]. DPC STEM could be a promising technique to visualize magnetic fields and microstructures simultaneously if the diffraction contrast problem is overcome. It is thus desired to suppress diffraction contrast in DPC STEM images in polycrystalline samples. In this study, we show that, by averaging DPC STEM images which are acquired in slightly different tilt conditions, we can drastically suppress diffraction contrast even in polycrystalline Nd-Fe-B magnets. 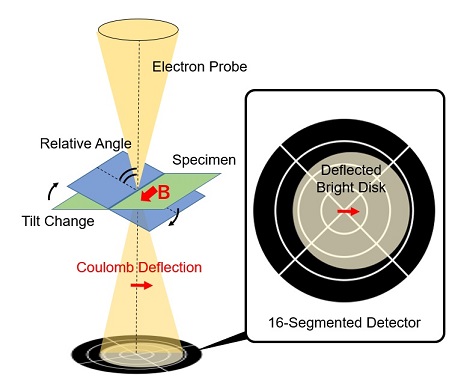 Figure. 2 (a) Experimental ADF image of a polycrystalline Nd-Fe-B magnet. (b) Experimental DPC image. (c) The averaged DPC image of 64 DPC images acquired in the same area and various sample-tilt conditions. The magnetic easy axis of the grains is horizontal direction of images and the colour wheel with “M” represents the direction of magnetic field.