Artificial spin ices can be formed from geometrically-frustrated arrangements of two-dimensional magnets. Magnetostatic interactions between the magnets in such an array can lead to rich emergent behavior, including the formation of magnetic monopoles, chiral dynamics and phase transitions. The ability to map magnetic fields with high spatial resolution is essential to gain an understanding of this behavior. When compared with two-dimensional systems, magnetic frustration in three-dimensional systems has been studied much less intensively.

Here, we use off-axis electron holography in an aberration-corrected ThermoFisher Titan 60-300 transmission electron microscope (TEM) operated at 300 kV to measure magnetic fields in an artificial two-dimensional spin ice lattice formed from stadium-shaped permalloy (Py) nanomagnets and in a three-dimensional Py magnetic gyroid structure. Off-axis electron holograms were recorded in Lorentz mode using a single electrostatic biprism and a direct electron counting camera (Gatan K2), both in magnetic-field-free conditions and in magnetic fields of between -0.15 and +1.5 T applied using the conventional microscope objective lens. In some cases, the recorded electron optical phase images were analyzed using a model-based iterative reconstruction algorithm, in order to determine maps of projected in-plane magnetization. The experimental results were compared with micromagnetic simulations, which were created based on input from conventional TEM images of the samples.

Figure 1a shows a bright-field TEM image of part of a finite array of Py (Fe17Ni83) nanomagnets, which are arranged in a square lattice on a SiN membrane. Each element in the array has dimensions of 470 x 170 x 15 nm. The magnetic contribution to the electron optical phase was separated from the mean inner potential contribution by turning the sample over inside the electron microscope. Figure 1b shows a magnetic induction map recorded from such Py elements. The magnetic phase contours that connect the elements can be seen to take the form of continuous zig-zag lines. Magnetostatic interactions between the elements were studied by applying both in-plane and out-of-plane magnetic fields to the sample. 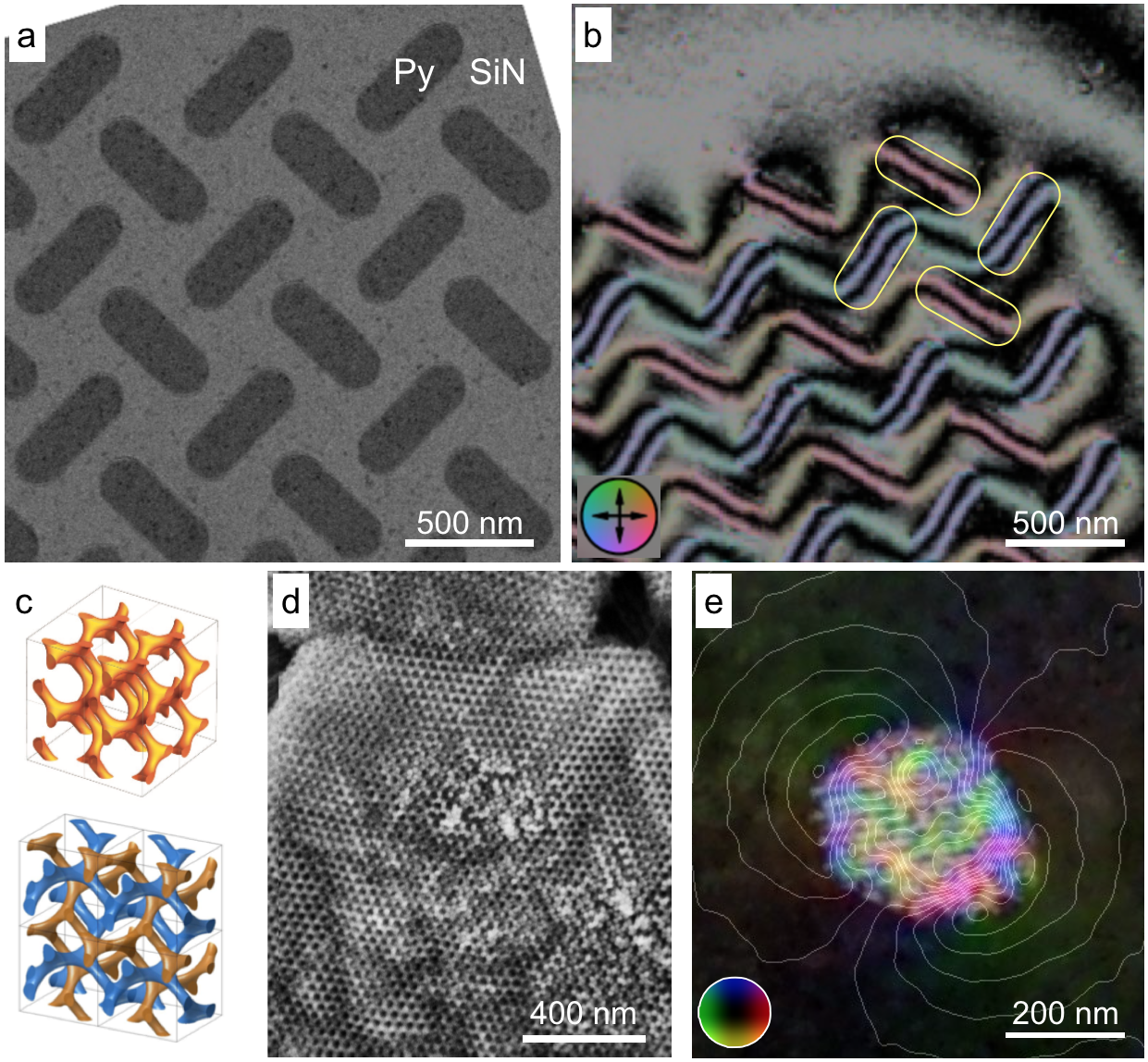 [1] This project has received funding from the European Research Council under the European Union's Horizon 2020 under grant agreement 856538. AK and JL thank to D Love, MRJ Scherer, U Steiner and CHW Barnes (University of Cambridge) for support on magnetic gyroids.