Magnetic near field imaging with EELS based on Babinet’s principle

Localized surface plasmon resonances (LSPR) are self-sustained collective oscillations of free electrons in metal nano- and microstructures, often called plasmonic antennas. LSPR can be characterized by scanning transmission electron microscopy (STEM) combined with electron energy loss spectroscopy (EELS) which utilizes an electron beam that interacts with the plasmonic antenna and excites the LSPR. EELS measures the energy transferred from electrons to the LSPR and it is sensitive to the electric near field of LSPR.

Babinet’s principle, originating in the wave theory of light and diffraction, relates the properties of a planar plasmonic antenna (particle) and a complementary aperture in a thin metal film of the same size and shape [1]. In particular, the energies of LSPR in both antennas shall be identical and the electric/magnetic field distribution of the solid antenna shall correspond to the magnetic/electric near-field distribution of the complementary aperture. This link can be readily used to study the magnetic near-field by measuring the electric near field by EELS in the complementary structure.

The first part of our study deals with plasmonic antennas featuring areas of extremely concentrated electric or magnetic field, known as hot spots. We demonstrate that combined EELS imaging of a plasmonic antenna and its Babinet-complementary counterpart allows to reconstruct the distribution of both electric and magnetic near fields of LSPR supported by the antenna as well as charge and current antinodes of related charge oscillations. As an example, we show in Figure 1 the STEM-EELS mapping of the electric and magnetic near field or the transverse dipole mode in a bow-tie antenna. Note that the qualitative correspondence between the simulated near-field distributions in Figure 1(d) and measured loss probability maps in Figure 1(e,f) is very good. 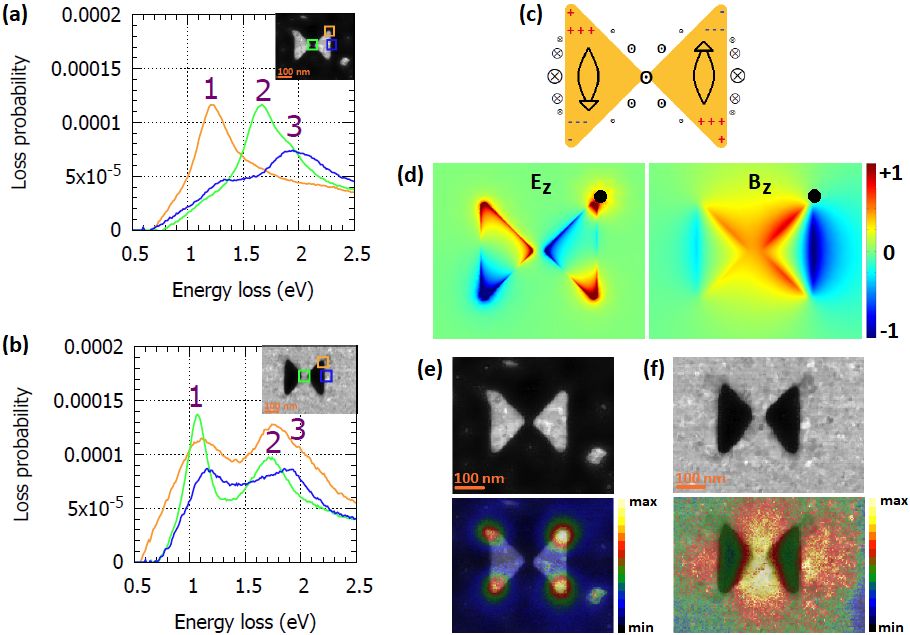 Figure 1: STEM-EELS mapping of the electric and magnetic near field in a bow-tie antenna: (a) Identification of three LSPR modes in a bow-tie (a) and an inverted bowtie (b) antenna with the total length of 300 nm. Schematic representation of transverse dipole mode (c) followed by numerical simulation of the calculated electric and magnetic out-of-plane near-field distributions (d). The black circles in (d) mark the electron beam position in the simulation.  STEM annular dark field micrographs of the bow-tie (e) and inverted bow-tie (f) antenna followed by measured loss probability maps at the energy loss corresponding to the first peak in (a,b) in both structures.

The second part of our study deals with disc-shaped plasmonic antennas. We have confirmed that the Babinet’s principle is qualitatively valid, but we have found some quantitative differences. By comparing experimental data with a theoretical model we found out differences originating from the limited theoretical validity of the Babinet’s principle.