The progress of ultrafast electron microscopy, using femto- to nanosecond electron pulses, depends on its wide applicability in different fields of physical, chemical and materials science. The application to irreversible phenomena is of high importance but particularly difficult because irreversible transitions of the objects have to be studied in the single-shot approach with intense pulses of electrons. Repulsion effects within the intense electron pulses reduce the spatial, temporal, and energy resolution of the technique. Here, we show that analytical TEM in the single-shot mode is achievable and provides extensive information in imaging, electron diffraction and EELS. The time-resolved quantitative analysis of the specimen is now possible and allows to investigate fast reactions in nanocrystals and to detect short-lived transition states.

We have integrated the laser optics for stroboscopic as well as single-shot operation into a 200 kV TEM (fig. 1a) having a thermionic gun with Wehnelt electrode [1, 2]. In the single-shot mode (fig. 1b), two pulsed lasers with a pulse duration of 7 ns are synchronized electronically and used for inducing transformations in the object (pump pulse) and the emission of photoelectrons from a flat Ta cathode (probe pulse). The energy distribution of the electron pulses is measured by a standard EEL spectrometer. The optimum operating conditions are obtained by varying the Wehnelt bias, the energy of the UV laser pulses on the photocathode, and the condenser lens currents. The Wehnelt electrode is used as an energy filter to reduce the energy width of the electron pulses. Reasonable energy widths for the separation of core-loss edges in the EELS are achieved and allow a quantitative elemental analysis with nanosecond time resolution. The image resolution is limited by the spherical and chromatic aberration of the objective lens and by shot noise to approximately 20 nm [2]. 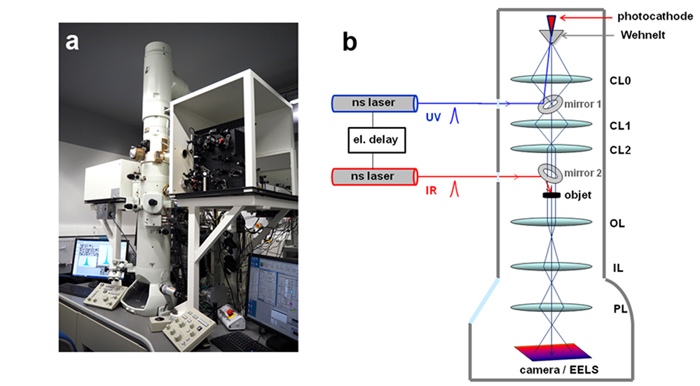 Figure 1. (a): Ultrafast TEM with the laser optics attached to the microscope. (b): Schematic setup of the microscope in the single-shot operation mode.

As an application, we show the time-resolved study of a fast chemical reaction at the nanoscale [3]. Nickel oxide nanocrystals on a carbon film are reduced to elemental nickel by exposing the crystals to a single infrared nanosecond laser pulse. The progress of the fast reduction reaction is then monitored in repeated experiments with different pump-probe delays using single-electron pulses for imaging, diffraction, and EELS. The transformation of 5 nm NiO crystals into larger Ni crystals is shown in figure 2. The image series in fig. 2a shows that the Ni particles appear approximately 3 µs after the pump pulse and don't change their morphology at longer delays. The series of EELS (fig. 2b) serves as time-resolved chemical analysis, showing the vanishing of the oxygen K edge at the same time scale. The quantitative analysis of the EELS reveals a reaction rate constant of 3x105 s-1 and shows an exponential decrease of the oxygen concentration as a function of time, which is characteristic for reactions of first-order [3]. Time-resolved diffraction (fig. 2c) shows that the reflections of NiO disappear simultaneously with the oxygen edge in the EELS. However, the reflections of Ni (the 220-reflection is highlighted) only appear after 30 – 100 µs. This shows that a liquid transition phase of Ni prevails 3 – 100 µs after the laser pulse and explains why the reaction is of the first order.

Time resolved TEM in the single-shot approach is therefore a powerful technique for revealing the reaction kinetics in nanomaterials which is very difficult to access by other techniques [4].

Figure 2. Fast reduction of NiO nanocrystals into elemental Ni under laser pulses. (a): Images taken with 7 ns electron pulses at different delays after excitation of the specimen. (b): EELS showing the disappearance of the oxygen K-edge after 3 µs. (c): Diffraction profiles showing the vanishing of the NiO reflections after 4 µs and the appearance of Ni reflections after 30 µs.

[4] Funding by the EQUIPEX program of the Agence Nationale de Recherche, contract ANR-11-EQPX-0041 and by the University of Strasbourg Institute of Advanced Study (USIAS), contract USIAS-2017-056 is gratefully acknowledged.