On the Visibility of Dark Plasmons in Cathodoluminescence Spectroscopy

Summary The outcoupling into the far-field of dark plasmonic modes in gold nanodisks has been systematically studied, using cathodoluminescence and electron-energy loss spectroscopy, experimentally and theoretically. It is shown that these optically inaccessible modes can be locally excited by an electron beam and collected in the far-field which is attributed to the breaking of the mirror symmetry by the high-index substrate. The visibility can be significantly improved by increasing the substrate thickness within the near-field range. Furthermore, the spectral position of the dark radial breathing modes can be tuned by varying the diameter, allowing for exploitation for nanophotonic applications.

Introduction Optical properties of metallic nanoparticles, smaller than the wavelength of the incident electromagnetic wave, are well-known to be dominated by localized surface plasmons – collective electron oscillations confined at the nanoparticle’s surface. While these radiative plasmonic modes have been widely studied and utilized, their non-radiative counterpart, dark plasmonic modes, have not been extensively investigated yet. Due to their lack of effective dipole moment, they are inaccessible by conventional optics using plane-wave excitation. However, they can be locally excited by an electron beam, and their near-field can be detected in electron-energy loss (EEL) spectroscopy, allowing to access the full electromagnetic local density of states (LDOS) [1]. In this work, the dark radial breathing modes (RBM) in Au nanodisks (NDs) have been studied, using EEL and cathodoluminescence (CL) spectroscopy, as well as numerical calculations utilizing the discontinuous Galerkin time-domain method (DGTD) [2]. Using the near-field excitation and far-field collection in CL, the outcoupling and tuning of dark RBMs have been systematically investigated, ultimately allowing to exploit their advantageous properties, such as a longer lifetime, narrower linewidth and much lower radiative losses than that of bright dipolar plasmonic modes. 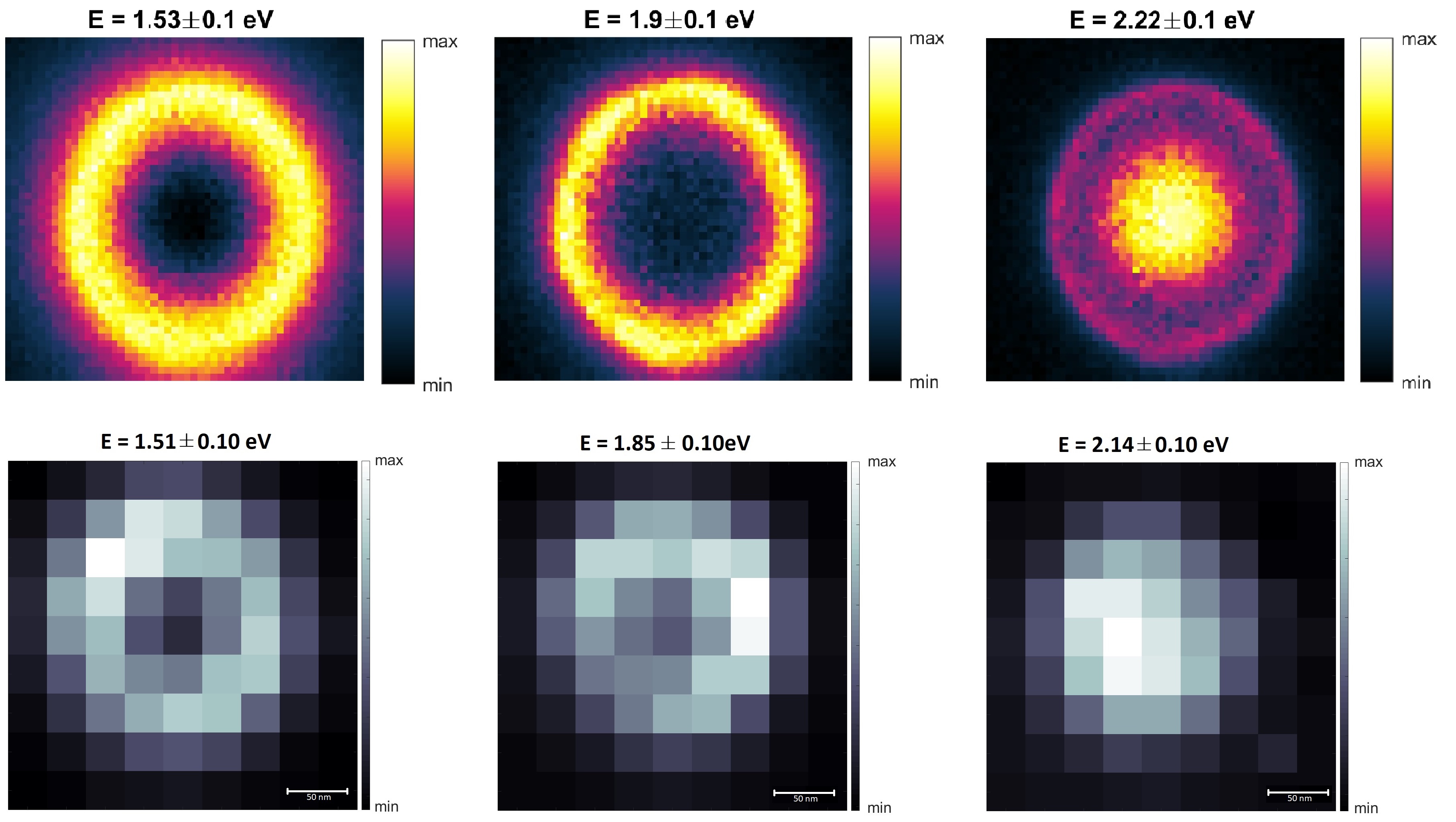 Results High spatial and spectral resolution EEL maps of an individual 20 nm-thin monocrystalline Au ND with a diameter of 160 nm reveal several spatially distributed plasmonic modes, as shown in the upper row of Fig. 1: The bright dipole at an energy of 1.53 eV with maximum intensity at the edge of the ND, the quadrupole mode at a higher resonance energy of 1.9 eV with a more confined spatial distribution close to the rim of the ND, and the dark RBM at an energy of 2.22 eV, exhibiting a mode distribution with highest intensity at the center of the ND. The bottom row of Fig. 1 depicts the CL maps of a different Au ND with similar dimensions as the one studied with EEL spectroscopy. The same three plasmonic modes are evidently visible in CL, even though it only probes the radiative part of the EMLDOS, principally forbidding the detection of dark modes. This phenomenon, attributed to retardation effects, has been reported before [3], however, the authors have shown that only Ag NDs with a diameter larger than 200 nm support the dark modes in CL. In contrast, our results demonstrate that CL of dark RBMs in much smaller Au NDs, down to 110 nm in diameter, can be detected. Furthermore, the visibility of the RBM in CL can be enhanced by increasing the thickness of the high-index (SiN) substrate which is in agreement with our numerical calculations of EEL- and CL-spectra, using the DGTD. An up to 4-fold enhancement can be achieved by increasing the substrate thickness from 5 nm to 50 nm, which is attributed to the breaking of mirror symmetry of the Au ND by the substrate rather than retardation effects. Here, the local electric field induced by the electron beam extends into the substrate and thereby creates an effective dipole moment that can subsequently radiate in the far-field. Our experimental and theoretical results indicate that the maximum enhancement is reached at a SiN thickness of 50 nm which is consistent with the typical extent of an electric near-field. In addition, it is demonstrated that the spectral position of the RBM in an Au ND can be tuned by varying its diameter, enabling the exploitation of nanophotonic applications [4].

Conclusion Monocrystalline Au NDs with varying diameters have been investigated by CL and EEL spectroscopy, exhibiting the bright plasmonic dipolar and quadrupolar mode but more interestingly, the dark RBM. While the diameter of the Au NDs showed to mainly affect the spectral position of the plasmonic modes, enabling the exploitation for nanophotonic applications. The substrate thickness seems to be responsible for the visibility of the dark mode in the CL spectra, as the high-index substrate breaks the mirror symmetry of the Au ND. These results suggest that the outcoupling of dark plasmonic modes is not negligible. The spectral tunability of the RBM as well as the increasing visibility achieved by choosing a suitable substrate, including its thickness, allows for their exploitation for nanophotonic applications.