Today’s Scanning Electron Microscopes support fast scanning and high throughput applications as well as small signal observations in the low current and low energy regime. As we have shown in the last years, the PNDetector Back-Scatter-Electron (BSE) diodes are capable of supporting both regimes.

In combination with the dedicated preamplifiers in PNDetector’s Back-Scatter-Detector (BSD) preamplifier modules scan speeds down to 10 ns pixel dwell times (which is the time the SEM takes for each pixel) can be achieved. In case of these very high speeds, the preamplifier gain is set to 104 V/A to not to cut off the bandwidth of the diode. Furthermore, the common housing of diode and preamplifier ensures minimal stray capacitances and minimal disturbance from the outside, which is an essential criteria. However, in this high speed configuration the detector is less sensitive to small signal operations.

When it comes to low beam energy and low beam currents, slower scan speeds have to be used to get sufficient SNR. Therefore, the gain of the preamplifier can be set higher (>106 V/A). This minimizes noise by cutting off higher frequency components and decreases the influence of the intrinsic amplifier noise contribution. Furthermore, the post processing of the signal can be done at lower gains, which further reduces the influence of picked up noise between the BSD preamplifier module and the post amplifier.

To overcome the restriction of choosing between high speed or low signal configurations we developed a new BSD-preamplifier module with two gain settings. The switchable BSD preamplifier module carries the BSE Diode and the preamplifier in a common flat aluminum housing. In addition to the solo gain version it has a control input which can be operated via a software interface. All benefits of the single gain versions (scan speeds in the low tens of ns, full vacuum compatibility, narrow design, flat bottom plane, compatibility to different diode types and more) are preserved while adding the possibility to switch between dedicated high speed and low signal configurations on the fly.

In the high gain setting the focus lays on measuring smallest signal inputs. As seen in Fig. 2(b) even at 500 eV acceleration voltage and medium beam currents of about 200 pA high quality images can be obtained. With the same detector module switched to the low gain setting, images with 20 ns dwell time can be achieved without any smearing between single pixels (seen in Fig. 2(a)).

The ability to switch during SEM observations between different gain settings enables the operator to cover the whole spectrum of modern SEM without compromising, or changing of detectors. This dramatically enhances the working range for BSE detectors, improves the workflow and helps to achieve results in shorter time.

We will present further images showing the capabilities of the new switchable BSD Preamplifier module, as well as addressing the benefits in workflow and the enhanced working spectrum. 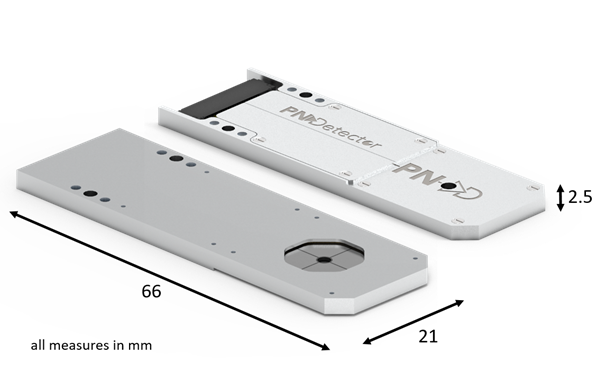