Our new pump-probe SEM-CL microscope is based on a 30 keV ThermoFisher Quanta250 SEM equipped with a Schottky field-emission electron cathode. We use the fourth harmonic of a 250-femtosecond pulsed laser beam at a wavelength of 258 nm to excite the W/ZrO electron cathode at a repetition rate of 1 to 25 MHz and create ps electron pulses by photoemission [1]. The number of electrons per pulse is 1-500 and is controlled by the laser power.  A second laser beam that is synchronously generated (either 1st, 2nd, 3rd or 4th harmonic) is guided to the SEM sample chamber and is focused to a 10-μm spot on the sample using a parabolic mirror (Fig. 1a). The emitted light (cathodoluminescence, CL, and photoluminescence, PL) is collected by the mirror and analyzed with a dedicated light collection system that records spectrum, angular distribution and polarization state of the emitted light. A time correlator is used to measure CL and PL decay dynamics at 70 ps time resolution;  as well as the g(2) two-photon autocorrelation statistics. To carry out pump probe spectroscopy, we use a delay stage to control the time between arrival of electron and laser pulses on the sample with sub-ps accuracy. We use either the electron as a pump and the laser as a probe, or vice versa, the laser as a pump and the electron as a probe.

We will present the first research projects carried out with the new instrument. We present pump-probe CL spectroscopy to study the state conversion in nitrogen-vacancy (NV) centers in diamond [2]. We find that the pulsed electron beam results in conversion from the NV– to the NV0 state, as is probed with second-harmonic (517 nm) laser pulses that are incident on the sample 1.3 ns after each electron pulse. We find that the state transfer dynamics depend strongly on the number of electrons per pulse. The experimental data are well described with a dynamic electron-induced carrier generation, diffusion and excitation model, including back-transfer to the NV– state. We investigate the use of g(2) autocorrelation measurements of the CL photon bunching to identify pump-probe dynamics in GaN/InGaN quantum wells. We present a novel heterodyne technique to disentangle cathodoluminescence and photoluminescence interactions in CL pump-probe spectroscopy of Nd3+-doped Y2O3 and show how the new instrument can be used to study a wide range of dynamic phenomena in electron- and laser-excited plasmonic and dielectric nanostructures. 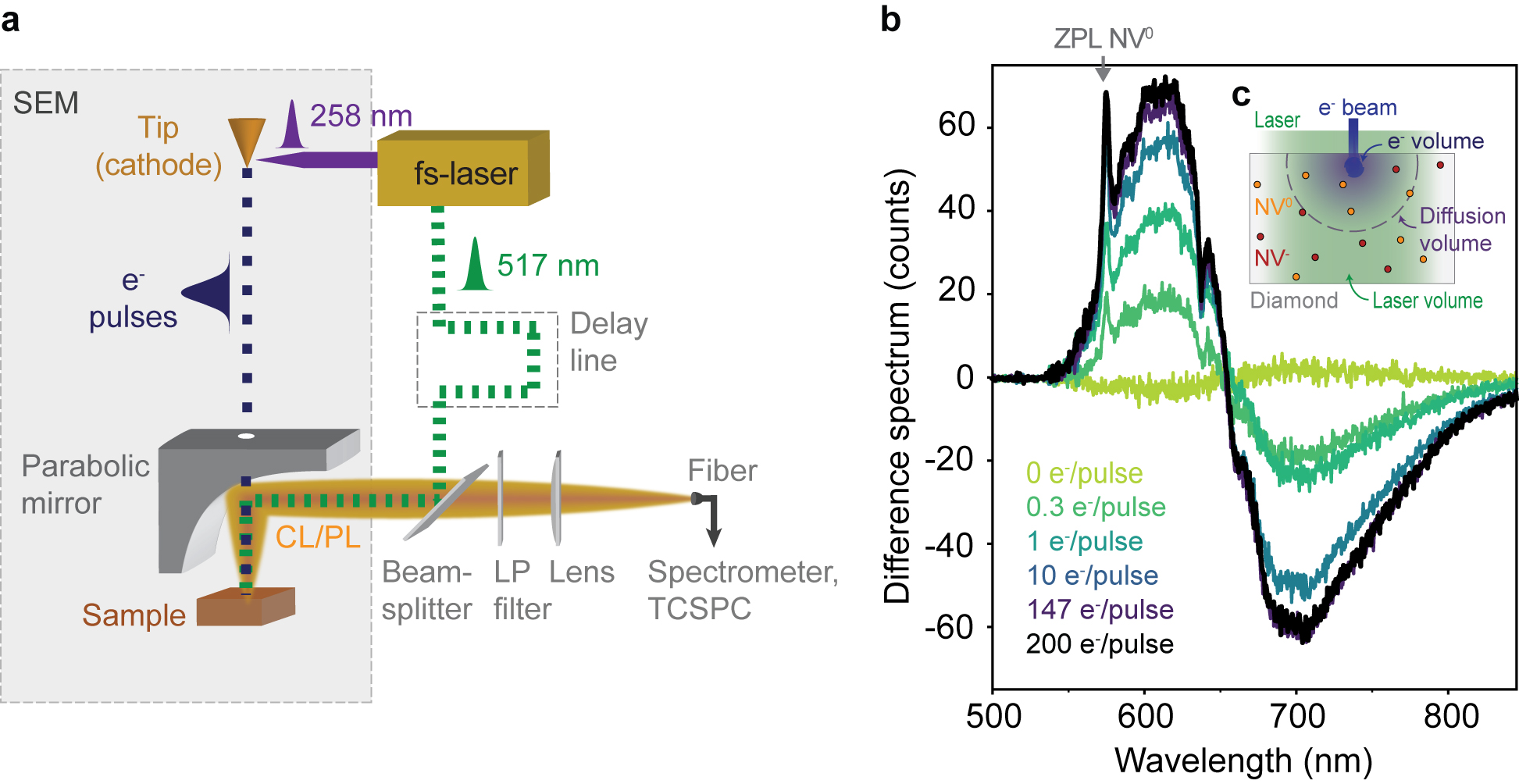 Figure 1. (a) Pump-probe cathodoluminescence setup, in which a femtosecond laser is used to simultaneously induce photoemission of electron pulses and optically excite the sample. (b) Pump-probe CL experiment on diamond NV centers: the difference spectrum, defined as the difference between the light collected when e- and light excite simultaneously the sample and the electron-only (CL) and light-only (photoluminescence) spectra, shows the electron-induced NV– ® NV0 conversion.