This study shows a method to determine the quantitative element or compound distribution in a specimen volume using a novel X-ray computed tomography method.

Ceramic Matrix Composites (CMC) typically consist of fibers embedded in a ceramic matrix. The addition of fibers into the ceramic results in a material with high damage tolerance and good thermal shock resistance. CMCs are e.g. used for thermal protection and advanced frictional systems (brakes). Examples of CMCs are Al2O3-Fibers in alumina or C-/SiC-fibers embedded in a SiC matrix. The latter, often abbreviated as Cf/SiCm , or SiCf/SiCm, can be cost-efficiently manufactured using the melt infiltration process (Liquid Silicon Infiltration, LSI). In this process, molten silicon is infiltrated into a porous carbon matrix with which it reacts to silicon carbide (SiC). The formation of the SiC matrix, however, is often incomplete, resulting in residues of pure silicon or unconverted carbon. Unreacted silicon may at temperatures above 1200 °C react with the reinforcing fibers or form silica (SiO2) with oxygen and thus cause a reduction in creep resistance and strength, eventually leading to failure.

There is, therefore, a well-founded interest in detecting residual silicon in CMCs. This study describes the use of a relatively new X-Ray Computed Tomographic (CT) imaging method, called Dual Energy Computed Tomography (DECT), which is capable of detecting elementary silicon within the matrix.

All materials attenuate X-ray radiation depending on their density, thickness as well as on the energy of the X-ray photons. Based on conventional CT scans, one can only draw a qualitative conclusion in respect of the material build-up of the object under investigation and it is difficult to quantitatively determine the exact material which was scanned.

The DECT tries to circumvent this problem by measuring the same object several times with different X-ray energy spectra. By doing so, one can build a simplified linear equation system of the attenuation coefficients of the object which can be either solved for density/atomic number or for two different materials. In the first case, one can determine the density and the atomic number of each voxel in the object while the second case allows one to separate two (or more) distinct materials in a 3D volume.

For this study, a Cf/CSiCm manufactured at Fraunhofer HTL was tested to determine if residual silicon could be detected. For this purpose, the material separation method was chosen and applied to silicon and carbon. For testing, the central regions of three mounted together coupons made of Cf/CSiCm with dimensions of 60x10x3mm were investigated (Figure 1). CT-measurements were performed using a calibrated VISCOM X‑9225D polychromatic X-Ray source and a 2k flat indirect detector (Perkin Elmer XRD 1621 AN3-CT). 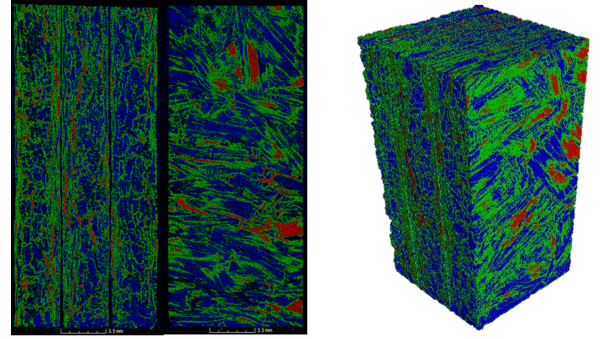 The results were verified by making a micrograph of the cross-section of one coupon. The element distribution of the cross-section was analyzed using a polarized light microscope (backscattered light), SEM (Back Scattered Electrons), and EDX (X-ray return). The location of the micrograph was identified in the 3D-volume and the corresponding DECT data compared. Table 1 shows that the DECT analysis provided similar results as determined by the light microscope and SEM.

The results prove the validity of the DECT method: a volumetric separation of elements can be performed using a non-invasive method. The data in Table 1 also shows that a surface analysis is not necessarily representative of the whole CMC: the determined volumetric fractions of each material in the volume differ from the surface area percentages determined in the micrograph.

Table 1: Area percentages of each material in the CMC for different analyzing methods

In conclusion, one can say that the DECT is a valid non-destructive testing method for determining the elemental composition in heterogeneous materials. It can be used to analyze CMCs for quality control purposes such as detecting unwanted residual silicon. Its biggest advantage compared to element analysis methods such as XRD or BSE is the capability to analyze the complete volume of the specimen.