We demonstrate high-speed imaging of thin resin sections using a novel optical scanning transmission electron microscopy (OSTEM) detector. Compared to conventional scanning transmission electron microscopy (STEM) detectors, OSTEM does not require the use of a grid, thus allowing for seamless imaging over large fields of view. High quality images showing a similar level of detail as conventional backscattered electron detector (BSED) or STEM images can be achieved. In addition, OSTEM can be used at dwell times significantly shorter than a BSED, enabling increased throughput for electron imaging of biological material.

In the imaging method presented here, samples are placed directly on a screen of scintillating material such as cerium-doped yttrium aluminum garnet (YAG:Ce). Electrons transmitted through the specimen impinge on this substrate and produce cathodoluminescence in a localized spot, which is collected using an integrated objective lens and a photon detector (figure 1). Contrast in this imaging scheme therefore depends on the number of electrons passing through the specimen, providing a readout of its electron density. A similar scheme has previously been used by Okumura et al. to image whole cells grown on the scintillator surface, and as a detection method for multi-beam electron microscopy[1,2,3]. Here, we demonstrate and benchmark the use of transmission imaging of thin resin sections, as a fast and high-quality alternative for backscatter detection in single-beam SEMs.

To this end, we modified a SECOM integrated fluorescence microscope (Delmic B.V.)[4] mounted on a FEI Verios 460 SEM by removing the excitation/emission filters and mounting a multi-pixel photon counter (Hamamatsu) in the position of the CMOS camera (figure 1). 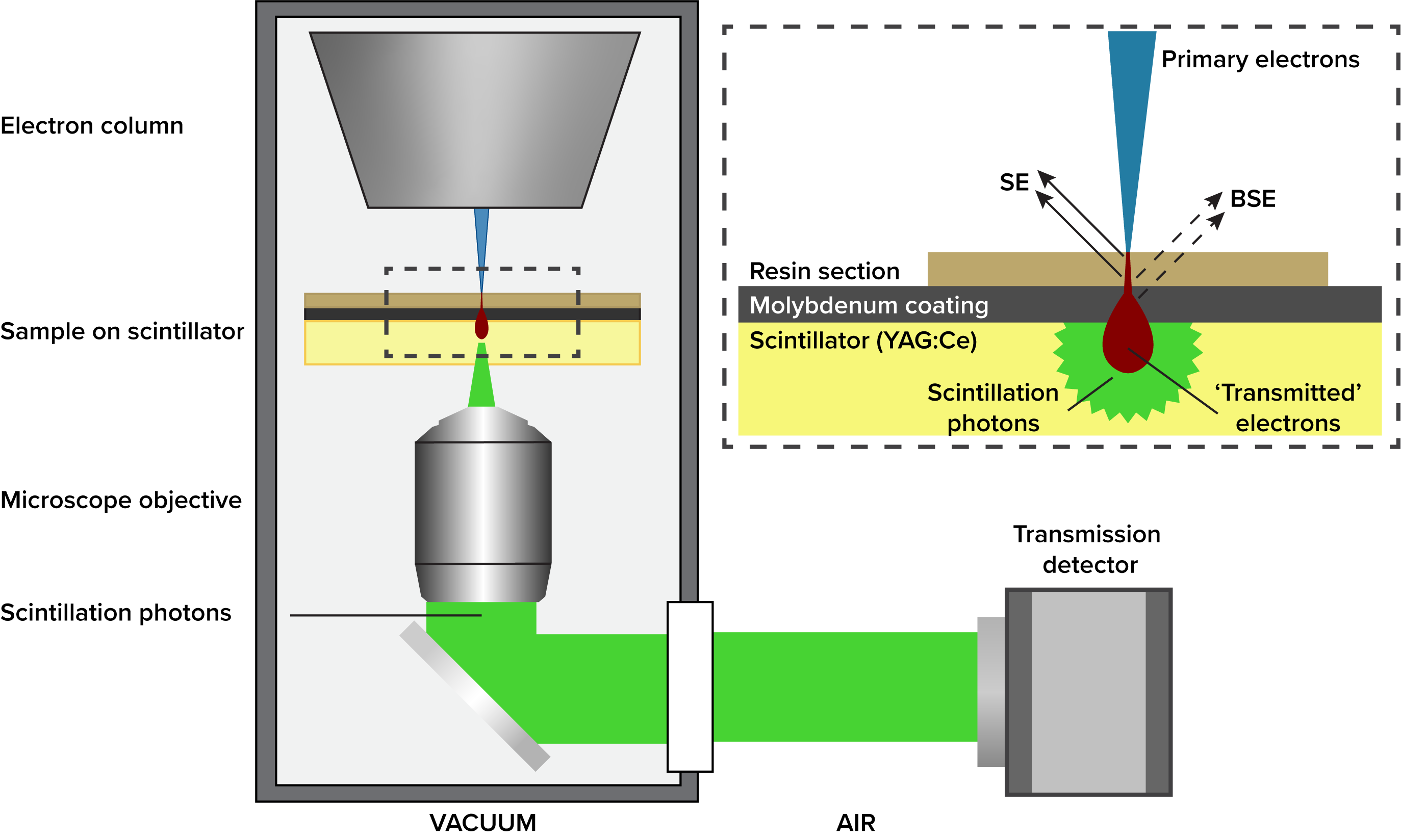 Figure 1 schematic of single-beam detector and basic principle of the transmission detector. Inset shows the geometry of the sample and the different electron populations detected in SEM of biological specimens.

Sample preparation for OSTEM imaging was similar to that for BSED or STEM imaging of resin sections. Chemically fixed rat pancreas and liver were stained with heavy metals, dehydrated and embedded in epon resin. 80 nm thick sections were collected on YAG:Ce screens coated with a 30 nm molybdenum layer. This layer reduced charging and saturation of the scintillator. After collection, samples could be imaged in the SEM without additional poststaining or conductive coating.

Sections were imaged in BSED and OSTEM modes, which allowed a comparison of the two imaging modes (figure 2A, B). Like with BSED, the scintillators provide an unobstructed field of view since no grids are needed to support the sample. In addition, we found that compared to conventional (S)TEM, the samples are more stable during imaging, removing the need for long ‘pre-bake’ steps to stabilize the resin section and formvar support film. At low dwell times, OSTEM provides better image quality than BSED. Conventional concentric backscatter detectors have a long signal decay time, which reduces the signal to noise at low dwell times (<2 μs). The transmission detector shown here however collects high-quality data even at dwell times <1 μs (figure 3). Similar results were obtained on other types of tissue.

In conclusion, we describe an efficient detection method to image thin resin sections in SEMs. Transmission detection produces high-quality images even at short dwell times and captures images without visible sample support. The system described here is compatible with routine samples and does not interfere with, and can be used simultaneously with any other SEM detectors, such as retractable BSE detectors or EDX. The potential for increased throughput is highly beneficial for large-scale imaging applications, such as connectomics, nanotomy and array tomography.