Reactivity of gold nanoparticles under O2 and H2 at ambient pressure

Rationalizing the reactivity of metallic nanocatalysts using a combined experimental and modeling approach.

Though it has been shown that catalytic activity of supported gold nanoparticles (Au NPs) depends on a number of key parameters such as temperature, particle size and shape and particle-support interface, the quest since the advent of heterogeneous gold catalysis has been to determine the origin of the active catalytic sites, especially in oxidation reactions with O2 as the oxidant and hydrogenation reactions with H2 as the reductant. Indeed, the mechanisms of O2 and H2 adsorption and dissociation are still under debate with some works supporting molecular adsorption/dissociation directly on Au NPs while others claiming that such processes occur at the perimeter of their interface with the supports [1]. The absence of a consensus on these issues is due to the lack of a clear picture of the evolution of the structural properties of Au NPs under O2 and H2 at near reactions conditions, i.e. at high pressures and high temperatures. In this contribution, we provide a fundamental understanding of the O2 and H2 adsorption properties of Au NPs at atmospheric pressure using an original approach combining in situ gas observation and theoretical modeling of nanoparticle morphology under gas environment and temperature,

More specifically, our approach is based on in situ nanometer-scale HAADF-STEM observations of particle equilibrium shape of Au NPs under gas atmospheres using window gas cell environmental transmission electron microscopy (GCTEM) and multi-scale structure reconstruction (MSR) modeling based on the Wulff theorem, the Langmuir adsorption isotherm and the density functional theory calculations. Here, it is used to determine the adsorption properties of titania-supported Au NPs under O2 and H2 at atmospheric pressures between 400 °C to room temperature [2]. In situ observations of the morphological evolution of gold NPs under gas atmospheres were carried out on a JEOL JEM-ARM200F microscope equipped with a cold FEG electron source and a Cs-corrector of the objective lens and operated at 200 kV. To confine the gaseous medium in a restricted zone around the sample, an environmental high-temperature and high-pressure gas cell designed by Protochips Inc was used. Changes in particle structure and morphology under gaseous atmospheres were studied by HAADF-STEM imaging.698

In situ GCTEM observations show instantaneous changes in the equilibrium shape of Au NPs under O2 during cooling from 400 °C to room temperature (Figure 1). 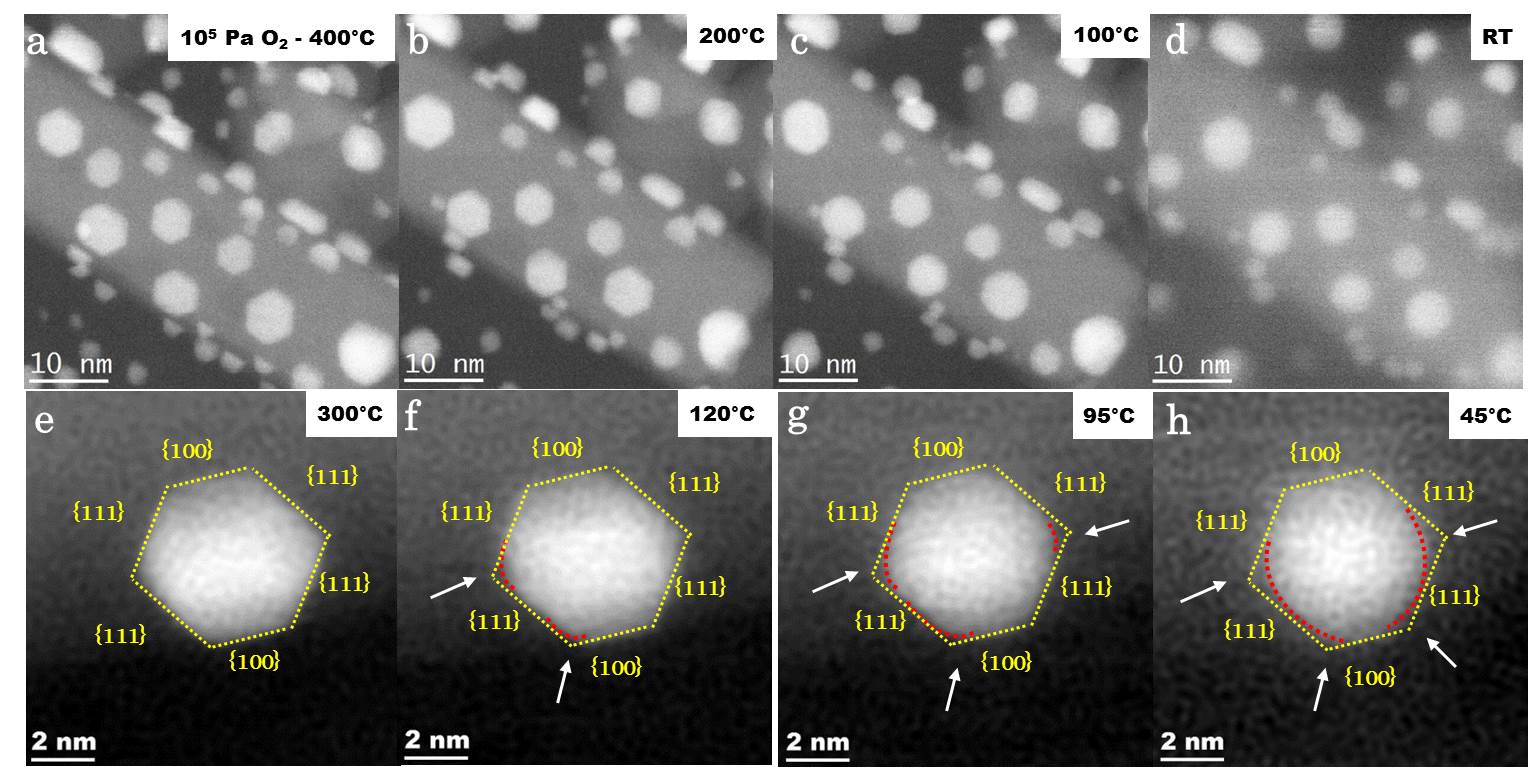 Figure 1: (a)-(d) Monitoring by HAADF-STEM of the morphological transformation of an assembly of gold nanoparticles supported on rutile TiO2 nanorod between 400 °C and room temperature in the presence of O2 at ambient pressure. (e)-(h) The morphology is an octahedron truncated at high temperature and more rounded at room temperature.

In contrast, no instant change in equilibrium shape is observed under H2 environment. To interpret these experimental observations, the equilibrium shape of Au NPs under O2, atomic oxygen, and H2 is predicted using a multiscale structure reconstruction model. Excellent agreement between HAADF-STEM observations and theoretical modeling of Au NPs under O2 provides strong evidence for the molecular adsorption of O2 on the Au NPs below 120 °C (Figure 2).

Figure 2: Morphological transformation under O2 of a gold nanoparticle from a truncated octahedron at high temperature to a rounded morphology at room temperature, reproduced by a theoretical model combining DFT, Langmuir's adsorption isotherm and Wulff's construction.

Experiments and modeling show that Au(100) and (110) facets are active in O2 adsorption but are inactive in H2 adsorption. The Au(111) facet is inactive in the presence of both O2 and H2.

In the case of H2, theoretical modelling predicts no interaction with gold atoms that explains their high morphological stability under this gas observed by GCTEM.

Through the combination of in situ gas observation and modelling of nanoparticle morphology under gas environment and temperature, we provide a fundamental understanding of the O2 and H2 adsorption properties of Au NPs at atmospheric pressure, which is a key step in many catalytic reactions. Thus, such an understanding can be used to significantly foster the rational design of more active Au nanocatalysts. More generally, our approach provides a new pathway for identifying active sites of heterogeneous nanocatalysts under reaction conditions as closed as possible to real ones and a better understanding of adsorption processes at their surfaces, by monitoring in situ their surface structure reconstruction.