The scanning electron images of etch pits obtained at the energy of beam electrons 1−25 keV were used to calculate the concentration of etch pits on the surface and in subsurface layers at a depth up to 250 nm of the platinum alloy gauze employed in the oxidation of NH3 with air. The obtained concentrations equal to 2.9 ´ 107−6.0 ´ 108 cm–2 are consistent with the typical density of dislocations in the annealed polycrystalline metals. The detected etch pits can serve as the “hotspot”-like active etching sites.

Industrial oxidation of ammonia with air on platinum alloy gauzes is widely applied for the production of nitric acid, which is used to obtain fertilizers and many other substances [1]. The catalytic oxidation of NH3 is accompanied by intense catalytic etching of the gauze surface, which leads to a loss of platinum metals, mechanical degradation of gauzes, and reduces the period of efficient operation of the catalyst. To solve these problems, it is necessary to investigate the catalytic etching of platinum alloy gauzes, particularly the initiation of etching under the action of catalytic oxidation of NH3 with oxygen.

In this work, to reveal the mechanism of the initial step of catalytic etching, images of the etch pits emerging during the catalytic oxidation of NH3 with air oxygen were obtained, and distribution of such pits over the surface and in subsurface layers of platinum alloy gauzes was analyzed. The study was carried out using the platinum alloy gauzes made of a wire with the diameter 82 mm and composition (wt.%) 81% Pt, 15% Pd, 3.5% Rh and 0.5% Ru. The oxidation of NH3 with air was performed on a pack of four gauzes with the total weight of 0.61 g in a laboratory flow-type quartz reactor with the internal diameter 11.2 mm at the linear feed rate of the mixture (~10% NH3 in air) 2.57 m/s, catalyst temperature 1133±5 K, and total pressure ~3.6 bar for 50 h. The surface morphology and microstructure were studied on the first gauze along the gas stream using a JSM-6460 LV (Jeol) scanning electron microscope (SEM) at the energy of beam electrons (Е0) from 1 to 25 keV in the secondary electron (SE) mode.

After NH3 oxidation, the frontal side of the gauze has mostly a solid rough layer consisting of the “cauliflower”-like agglomerates and regions with a smooth surface. Etch pits with the size of ~60 nm were detected on this surface with the concentration 6.0 × 108 cm–2. At the boundary with the rough layer, their size increased to 130 nm and concentration decreased to 1.0 × 108 cm–2, testifying to the growth and merging of etch pits. In the central part of grains, the concentration of etch pits was approximately threefold higher than in the region near grain boundaries. On the back side of the gauze, close values of the etch pits size and concentration were reported [2]. The obtained concentrations of etch pits on the frontal and back sides of the gauze are consistent with the typical density of dislocations (107–108 cm–2) in the annealed polycrystalline metals, which indicates that etch pits are formed on such defects during the oxidation of NH3 [2]. Images of the grain surface recorded at the energy of beam electrons 5, 10 and 20 keV demonstrate that the etch pits concentration gradually grows with increasing the depth of analysis from 15 to 50 and 158 nm at the indicated E0 values (Fig. 1a, b, c). In the E0 range from 1 to 25 keV, a gradual decrease in the concentration of etch pits from the surface to the depth was observed (Fig. 1d). In the 50 nm thick surface layer their concentration reached a maximum of 1.9 × 108 cm–2. In subsequent layers with the thickness of 50 nm, the concentration gradually decreased to 2.9 × 107 cm–2 at a depth up to 250 nm (Fig. 1d). 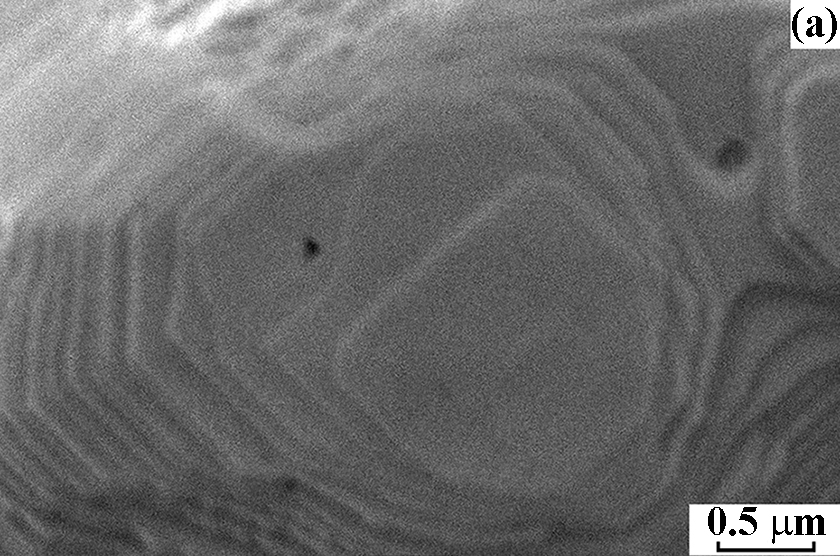 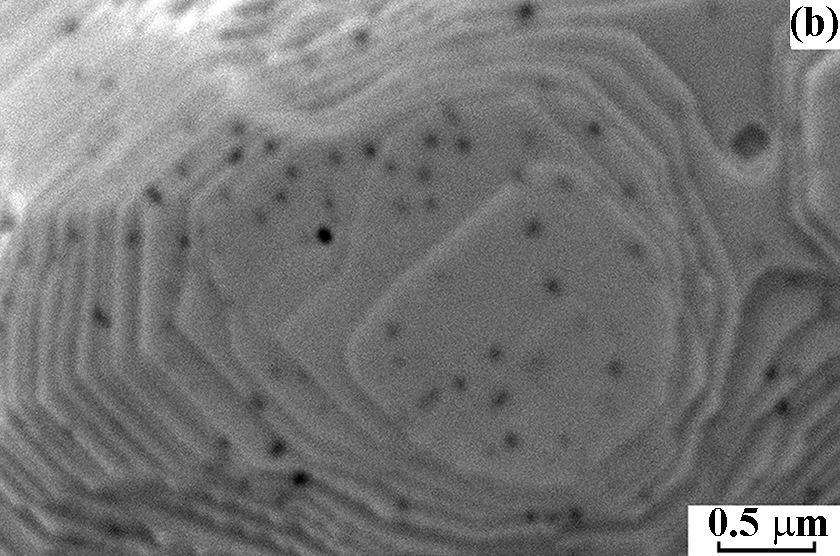 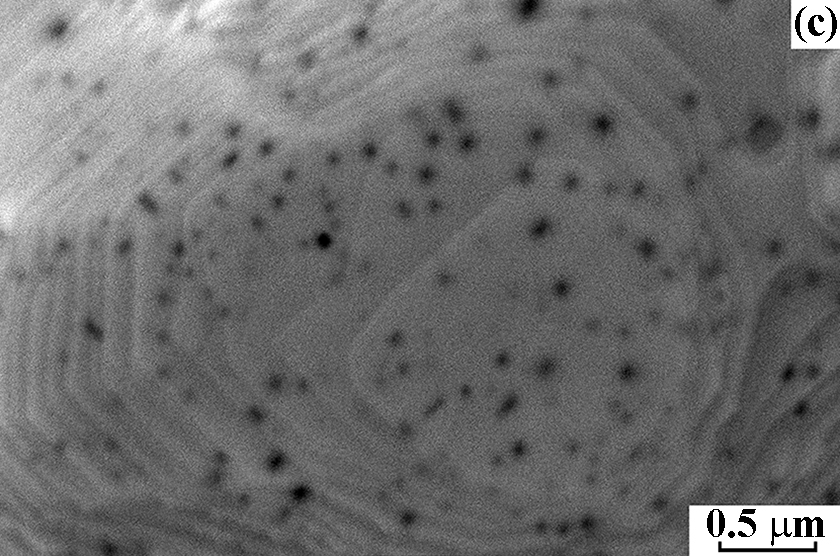 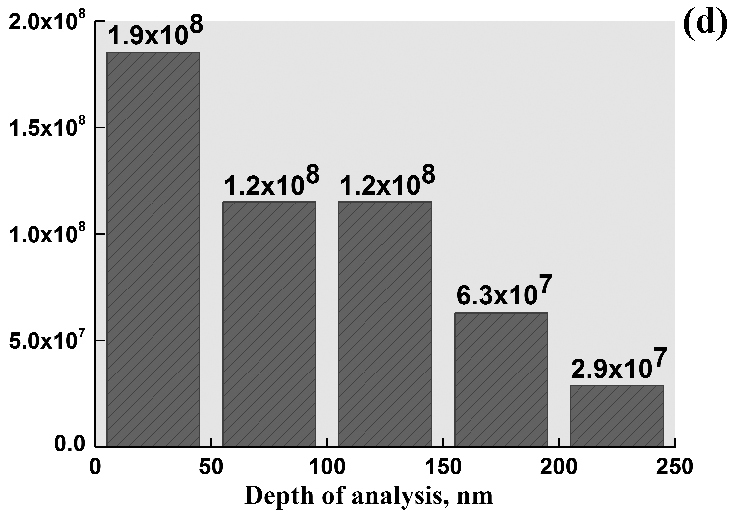 The observed etch pits residing on dislocations and other defects can serve as the “hotspot”-like sites, which create a temperature gradient in the region of defects on the catalyst surface; this provides a transfer of metal from “hot” regions to “cold” ones, thus leading to etching of the catalyst surface [3]. In the region of defects, there may proceed an intense highly exothermic oxidation of NH3 with the oxygen incorporated into subsurface layers. The occurrence of this reaction on defects leads to a local increase in temperature due to strong exothermicity of NH3 oxidation. The increase in temperature accelerates the transfer of metal atoms from defects and their migration to the surface. This process results in the emergence and growth of etch pits on the surface in the region of dislocations and grain boundaries, which are seen in images on the back and frontal sides of platinum alloy gauze [2], (Fig. 1).

This is the first study where images were obtained for nanosized etch pits on the surface and in subsurface layers of wire on the back and frontal sides of the platinum alloy gauze after NH3 oxidation, which allowed us to estimate the size and concentration of etch pits and their distribution on the surface and in subsurface layers of wire. The observed rearrangement of the wire surface layer is caused to a great extent by the formation of “hotspot”-like etch pits, which create a temperature gradient in the region of defects. Thus, metal atoms migrating from defects to the surface during surface diffusion can form crystalline terraces with a low concentration of defects, which cover the entire surface of grains. The growing terraces close etch pits, so a considerable part of the pits appears in subsurface layers.