Industrial oxidation of ammonia with air on platinum alloy gauzes is widely applied for the production of nitric acid, which is used to obtain fertilizers and many other substances [1]. The catalytic oxidation of NH3 is accompanied by intense catalytic etching of the gauze surface, which leads to a loss of platinum metals, mechanical degradation of gauzes, and reduces the period of efficient operation of the catalyst. To solve these problems, it is necessary to investigate the catalytic etching of platinum, which is the main component of catalytic gauzes.

In this work, to reveal the mechanism of the initial step of catalytic etching, images of the platinum surface after the catalytic oxidation of NH3 with air oxygen were obtained. The study was carried out using the polycrystalline platinum foil (Pt(poly)) with the size of 10´5´0.04 mm. The sample was assembled into a package with four platinum alloy gauzes having the composition (wt.%) 81% Pt, 15% Pd, 3.5% Rh and 0.5% Ru required to maintain standard conditions of the NH3 oxidation process. The oxidation of NH3 with air was performed in a laboratory flow-type quartz reactor with the internal diameter 11.2 mm at the linear feed rate of the mixture (~10% NH3 in air) 2.57 m/s, catalyst temperature 1133±5 K, and total pressure ~3.6 bar for 1 h. The surface morphology and microstructure were studied using a SU-8220 (Hitachi) scanning electron microscope (SEM) at the energy of beam electrons (Е0) 20 keV in the secondary electron (SE) mode.

High-resolution SEM was used to obtain microimages of the Pt(poly) surface after the oxidation of NH3 with air at 1133 K for 1 h (Fig. 1). Fig. 1b displays the most typical region of the sample surface with the size of ~40´40 mm, which consists of three adjacent ~20 mm fragments having different morphology. A dark triangular fragment of the surface is seen in the bottom part of Fig. 1b; fragments containing bright elongated regions with the width ~1 mm and length up to 5 mm are located in the left and right parts. In Fig. 1c, the image marked with the bottom rectangle in Fig. 1b shows the surface morphology typical of the entire lower dark fragment in Fig. 1b. In Fig. 1c one can see pyramids with the size from 0.1 to 1.0 mm and the ~0.1 mm particles located mostly on the vertices of these pyramids. To provide a clear representation of the pyramids and their spatial arrangement, the surface on which pyramids are located is marked in red, the pyramids – in yellow, and particles on the pyramid vertices – in blue. In Fig. 1a, the image marked by the upper rectangle in Fig. 1b shows that elongated bright regions are represented by voids with the width and length up to 1 mm. To distinguish the void boundaries, the bottom of voids is marked in red, their sidewalls – in yellow, and the upper part – in blue. 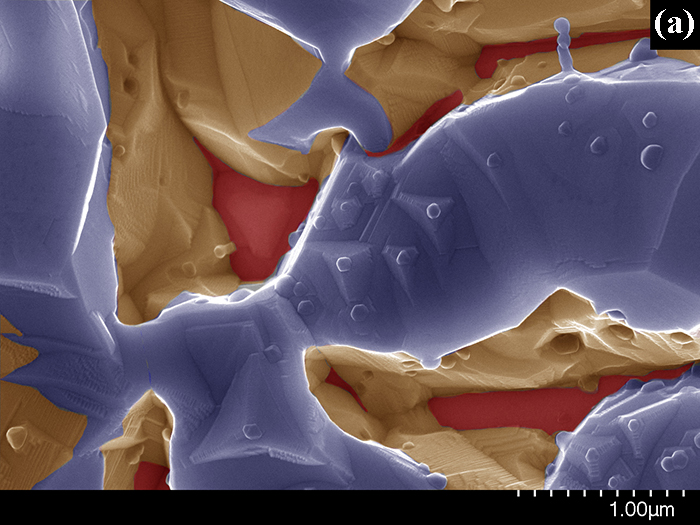 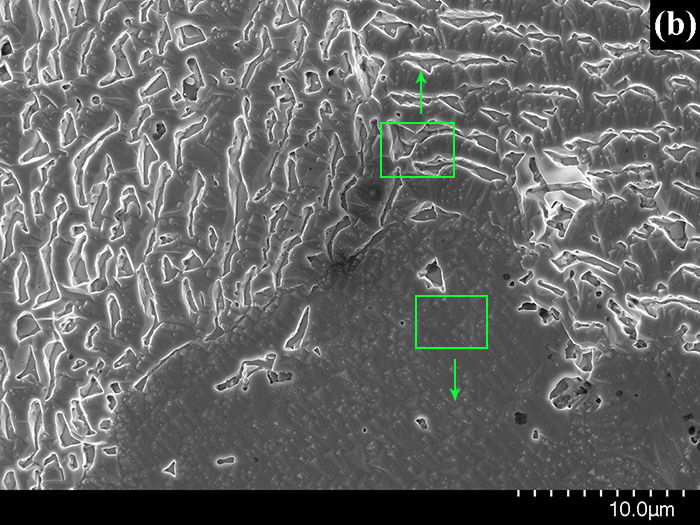 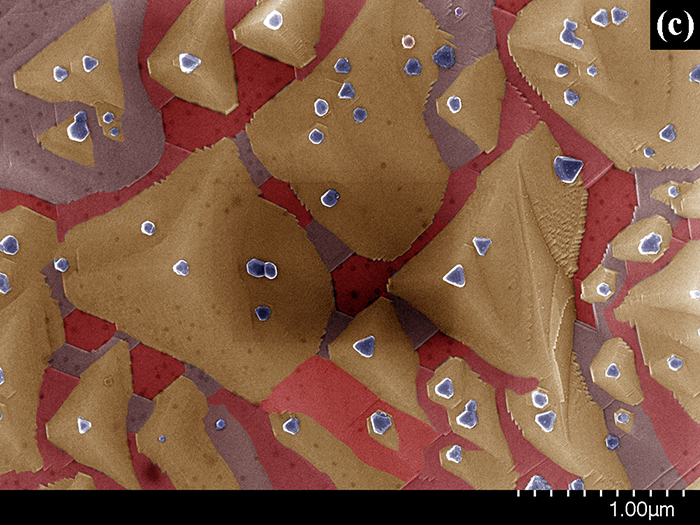 Figure 1. Scanning electron images of the Pt(poly) surface after the oxidation of NH3 at 1133 K for 1 h obtained in SE mode at E0 = 20 keV. b – image of the most typical region of the sample surface obtained at a ´3 000 magnification; a and c – images of the surface regions marked by squares in Fig. 1b and obtained at a ´30 000 magnification. To distinguish fragments of images, they are presented in different colors (details can be found in the text).

Surface fragments displayed in Fig. 1b are components of the 100-200 mm grains that are formed during the oxidation of NH3. The highly exothermic oxidation of NH3 with the oxygen intercalated at defects leads to etching of the grain surface. The grain structure substantially affects the etching process. On the surface of grains with the (111) structure (Fig. 1c), the oxidation of NH3 on defects induces a local increase in temperature, which leads to segregation of Pt atoms to the surface. Pt atoms migrating on the surface create a saturated surface layer from which Pt atoms and volatile oxides like PtO2 and others are released to the gas phase. During the NH3 oxidation, the vaporized oxides and Pt atoms migrating on the surface form pyramids on dislocations, whereas upon cooling of the catalyst they form single-crystal Pt particles on the vertices of pyramids (Fig. 1c). NH3 oxidation is accompanied by the formation of regions with the width ~1 mm and length up to 5 mm on the surface of (110) grains (Fig. 1a); Pt atoms are intensively released from such regions, thus producing voids with the depth up to 1 mm. Taking into account that the voids have close orientation and order for each grain, they may be formed on the dislocation walls that occur as the ordered structures in grains and contain high concentration of defects. Upon NH3 oxidation, N and O atoms are intensively dissolved on these defects in subsurface layers. Migration of these atoms on defects and their recombination on the surface lead to the formation of NOgas molecules. Owing to these processes, the etching layer is formed, which includes deep elongated voids that appear on dislocation walls of (110) grains, and pyramids that grow on individual dislocations of (111) grains. A similar etching layer is observed at the backside of the first platinum alloy gauze along the gas stream [2].

Thus, the surface structure of Pt(poly) grains exerts an essential effect on the catalytic etching of platinum surface initiated by NH3 oxidation. The surface of (111) grains contains individual defects represented by dislocations. During the oxidation of NH3, the Pt atoms segregated to the surface form 0.1-1.0 mm pyramids on dislocations. The surface of (110) grains contains elements of dislocation walls with high concentration of defects. In the region of dislocation walls, the highly exothermic oxidation of NH3 leads to a pronounced segregation of Pt atoms to the surface and formation of elongated voids with the depth up to 1 mm and length up to 5 mm.