Using advanced and a double-aberration corrected Transmission and Scanning-Transmission Electron Microscopes ((S)TEM), this work presents a complete structural and chemical characterization of nanoparticles with interest in biomedical applications such as biomarkers, and computerized tomography (CT) and image magnetic resonance (MRI) contrast agents. These particles, which were synthetized via chemical methods, are formed by a core (CdTe, Au, Fe3O4, or Fe3O4 covered with Au) and a glutathione (GSH) layer acting as coating. Although many other characterization techniques are not able to detect the nanometric GSH shell, the results show how it is possible to do so using spectroscopic and imaging (S)TEM-related techniques

Gold, quantum dots (QDs) and magnetic NPs have been widely utilized during the last decade in medical applications [1]. The physical, chemical and optical properties of gold NPs, like their surface plasmon band [2], their capability to enhance the X-ray attenuation and their low cytotoxicity, make them highly attractive to biomedical uses. Magnetite (Fe3O4) is a highly interesting material to utilize as NP, since it is superparamagnetic at room temperature, and, when certain coating is used, its toxicity is reduced, even eliminated. Therefore, these types of NPs are ideal contrast agents for medical diagnosis via magnetic resonance [3]. On the other hand, semiconductor quantum dots (QDs), such as CdTe NPs, offers an interesting tool for biomarkers due to their unique size-tunable optical properties and, consequently, their size-dependent fluorescence [4]. In this case, since the toxicity might also be a concern for this NPs, so they are mostly utilized in ex vivo biomedical diagnosis [5]. These systems offer another advantage: NPs can be functionalized, coated with a polymer layer with a high, specific affinity. In this sense, GSH, which can be linked to the NP surface [6,7], is highly reactive with cancerous cells [8], due to the fact that these cells normally present oxidative stress.

The nanoparticles of this work were synthesized through different chemical methods. Structural and compositional characterization has been performed using different (S)TEM related techniques. Three STEM microscopes, supplied by Thermo Fisher Scientific, were utilized: a double-aberration corrected TITAN3 Themis and a Talos F200X, both managed by the Central Services of Research, Science and Technology (SC-ICYT, by its initials in Spanish) of the University of Cádiz, and a Talos F200S microscope equipped with Super-X system which includes two silicon drift detectors, which belongs to the Research, Technology and Innovation Center of the University of Seville (CITIUS). All three of these microscopes were operated at a 200 kV accelerating voltage.

All samples of NPs were successfully characterized, NPs average sizes were in the range of 4-5 nm, whereas GSH layers were no thicker than 2.5 nm. High resolution-high angle annular dark field (HR-HAADF) images (see Fig1a) indicate that NPs cores were crystalline and EDX-spectra (see Fig1b, c and d) revealed the expected composition for each case (sulfur signal indicates the present of glutathione). 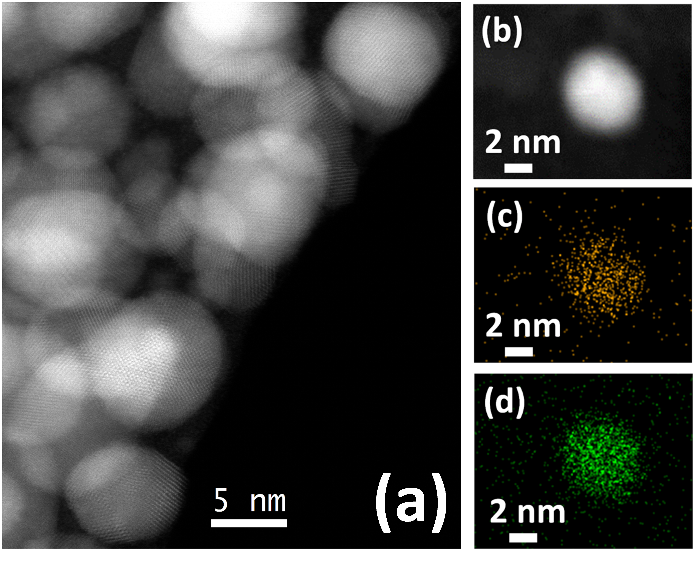 [9] The authors would like to acknowledge the SC-ICYT and the CITIUS central services of the Universities of Cádiz and Seville, respectively, which made possible the sample preparation and TEM studies in this work . The authors would like also to thank the Spanish Ministry of Economy and Competitiveness for the economic support to the research project MAT2015-67354-R (Program “Plan I+D+i”, subprogram “Retos”).