TEM studies of phase and domain boundary formation mechanism in nanowires of InRO3(ZnO)m (R ∈ {In, Fe})

The crystal structure, composition and physical properties of numerous compounds of the general formula ARO3(ZnO)m with A ∈ {In, Fe, Ln, [Sn1/2Zn1/2], [Sb1/3Zn2/3], …}, R ∈ {In, Al, Fe, Ga, …} and m ∈ integers have been studied for more than fifty years[1, 2]. However, the mechanisms governing the formation of the most distinctive structural features of those compounds, i. e. basal and pyramidal inversion domain boundaries, have only recently become a main focal point[3]. We aim to describe these processes down to the atomic scale.
ARO3(ZnO)m-type compounds mainly consist of ZnO slabs with wurtzite structure, interspersed with single layers of edge-sharing octahedra occupied by the A cation(s). The orientation of the occupied tetrahedral sites in the adjacent ZnO slab is inverted with respect to the c axis of the crystal system to avoid an unfavorable face-sharing with the octahedral layer. The octahedral layers are hence called basal inversion domain boundaries (b-IDBs). In the middle of each slab, a second inversion occurs at a single or double layer of trigonal bipyramids. This feature is called pyramidal IDB (p-IDB) and is occupied by the R cation. For sufficiently large m, the pyramidal sites are not arranged in a straight line across the crystal, but in a zigzag shape.

Nanostructures of In2O3(ZnO)m and InFeO3(ZnO)m, among other compounds, were synthesized via a two-step process. First, nanostructures of pure ZnO were grown on fused silica substrates using a thermal evaporation method and a unique metal-catalyzed growth mechanism. In the second step, these nanostructures were spin-coated with a solution of various metal salts, e. g. indium nitrate and iron(III) acetylacetonate. The solution droplets decompose at elevated temperatures to yield nanoparticles of the corresponding sesquioxides, which then react with the surface of the nanostructure, leading to a local formation of IDBs.

The onset of the formation of In-decorated b-IDBs is already observable after only 2 min of annealing. The region of the nanostructure permeated with IDBs grows in linear fashion at longer reaction durations, with sets of IDBs spanning the entirety of the nanostructure being observed as early as after 10 min of annealing.
Initially, after 2 min of annealing, b-IDB and p-IDB are parallel and directly adjoined to each other. EDS elemental distribution mapping displays that each p-IDB is located on the same side relative to its associated b-IDB. Intensity profiles show that a minimum of Fe K intensity coincides with a maximum of In L intensity and vice versa, confirming that In and Fe exclusively occupy b-IDBs and p-IDBs, respectively, even at this early stage of the reaction.
After 5 min of annealing, the p-IDB has detached from the b-IDB and taken the shape of a dome or triangle with a flat angle. In between the IDBs, an inversion domain forms, where the configuration of ZnO4 tetrahedra is inverted with respect to those outside of the domain. Ultimately, after 10 min, the p-IDB will assume an equilibrium angle with respect to the b-IDB that is governed by the atomic species occupying the p-IDB, e. g. 38° to 40° in the case of Fe. 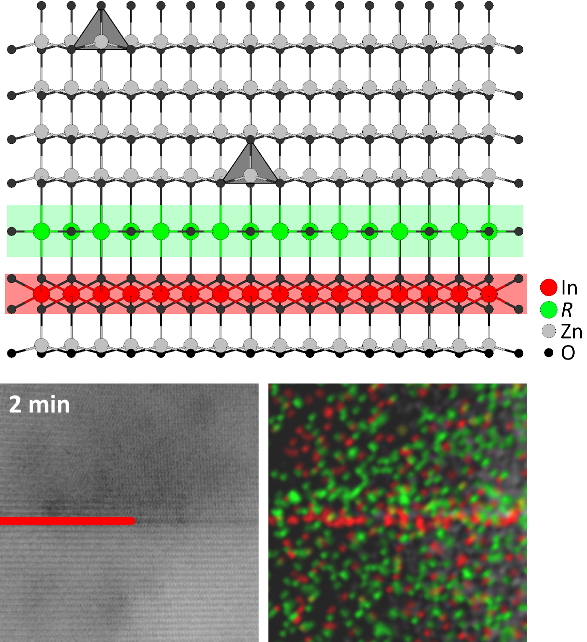 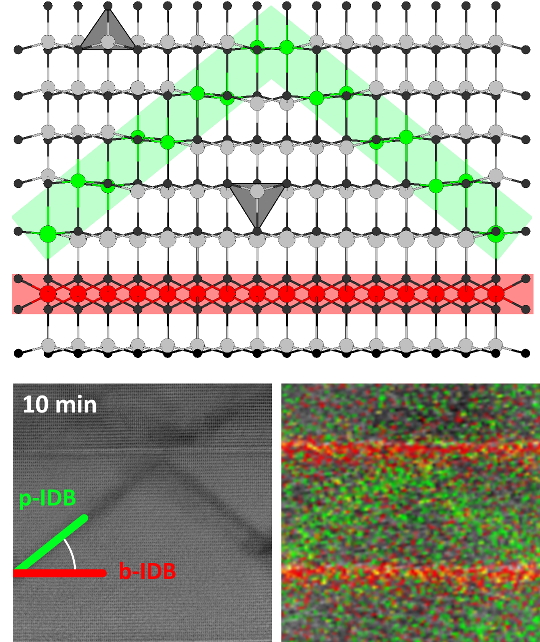 Figure 1. Comparison of experimental data (BF-STEM and EDS elemental maps) and atomic-scale models of basal and pyramidal IDBs in the initial (left) and final stages (right) of their formation.

Due to the non-centrosymmetric crystal structure of ZnO, nanowires of growth direction <10-10> exhibit an anisotropic morphology with a serrated edge of {0001} and {10-11}-type surface facets. Both types are highly reactive, as the Zn atoms located on them do not have a full coordination sphere of 4 O atoms. High-resolution HAADF-STEM imaging of In2O3(ZnO)m nanowires shows that b-IDBs preferentially form along the serrated edge. Atomic-resolution images reveal that the {0001} type facets are not terminated by the b-IDB itself, but by at least two complete layers of Zn atoms. We conclude that, by forming a b-IDB and inverting the ZnO4 tetrahedra close to the surface of the nanostructure, a reactive {0001}-type facet constituted by unsaturated Zn atoms is transformed into a close-packed inert facet.
{10-11}-type planes close to the surface show a visibly higher Z contrast than those further away from the surface and thus, a higher content of In instead of Zn. The atoms constituting them have a trigonal-bipyramidal coordination, which is more favorable for In3+. Atomic columns located directly at the surface have a tetrahedral coordination, although inverted with respect to the ones in the bulk of the material. The {10-11}-type surface facet lies parallel to the side faces of the tetrahedra, which are close-packed with oxygen atoms and thus unreactive.

Figure 2. Overview and atomic-resolution HAADF-STEM images of surface facets of a In2O3(ZnO)m nanowire.

Basal and pyramidal inversion domain boundaries initially form in a parallel arrangement and develop into their final zigzag shape over the course of the reaction. IDBs close to the surface facets of nanowires can reduce the overall reactivity of the nanostructure. Due to those phenomena, the reaction of ZnO nanostructures with suitable oxide particles progresses very quickly and can yield compounds which are not easily accessible via conventional solid-state synthesis routes.