The confinement of light under the volume of diffraction-limit observation using nanostructures creates a greater potential for monitoring individual molecules and better cell signals in cell biology [1-3]. In particular, high aspect ratio dielectric nanofillers have been studied to act as photonic structures for controlling light material injection and capturing biological targets [4, 5]. In this work, we provide hybrid plasmonic nanopillars with vertical SiO2 nanopillars terminated an Au nanodisk on a SiO2 substrate coated Au nanofilms that can achieve highly confined illumination volume created by plasmon localization on Au cap of SiO2 nanopillars. We are interested in plasmon focusing effects in the vicinity of Au cap as the nanoantennas. Plasma resonance location of the Au nanodedisk at the end of the SiO2 nanopillars can be observed in finite element method (FEM) simulations, which show high local light intensity to overcome the volume of detraction exploration.

The nanopillars were fabricated on square quartz coverslips by reactive ion etching with an electron-beam patterned mask. The coverslips were first spincoated with 300nm of polymethylmethacrylate (PMMA), followed by Espacer. The patterns were exposed by electron-beam lithography (Tescan) and developed in isopropanol. The mask was then formed by electron-beam evaporation of 50 nm Cr at 0.5 ~ 1 Å∕s, followed by lift-off with acetone. The quartz chip was plasma etched with a gas mixture of Ar and CF4 at flow rates of 7 standard cubic centimeters per minute (sccm) for O2 and 5 sccm for CF4. The reported process enables the fabrication of nanopillar arrays with diameter down to 200 nm, heights up to 750 nm and 1 um in period. Then, Thickness of Au nanofims and a Au nanodisk is 100 nm. The substrate was then cleaned in O2 plasma for 5 minutes and sputter coated with 3 nm Au for SEM imaging. The substrate was sterilized in ethanol and coated overnight in 0.1 mg/ml poly-L-lysine.

For explaining about localized plasmon oscillation of our designed structures, the electrical distributions near the hybrid plasmonic nanopillars are carried out by operating Finite Element Methods. The simulated structures consisted of SiO2 nanopillars array, representing optical waveguides, vertically standing on a SiO2 substrate, additionally covered with uniform Au nanofilms manipulating electron oscillation for localized plasmon. The domain of SiO2 nanopillars set to a circular cylinder of length, diameter and period affecting morphology of cultured cell on nanowire arrays and propagation of incident light along nanopillars. Materials constants of SiO2 are taken from Maliston with n = 1.457 for wavelength 633 nm. The outer area of nanowires and substrates was set up as water (n = 1.33) for substituting cultured cell. The outer calculated space was set to perfectly matched layer (PML) to absorb all propagating electromagnetic wave outside simulated modeling structures and avoid reflections and scattering of incident light at the boundary of simulated space. Monochromatic light of wavelength 633 nm is incident to vertical direction and contains a dipole with a dipole moment to the parallel axis of the nanopillars. Its wavelength is chosen as fluorescence excitation source inside cells and far-field radiation to resonantly interact with Au nanofilmst to create surface plasmon. In the following, electromagnetic field profiles surrounding Au nanofilms at the tip of SiO2 nanopillars are investigated to evaluate how can these structures manipulate plasmon oscillation for nanofocusing at that of SiO2 nanopillars.

Local field enhancement is taken place at tips of vertical hybrid nanopillar arrays as localized surface plasmon driven resonantly at an optical frequency of incident light. We demonstrated that our designed hybrid nanoantennas can manipulate surface plasmon-polariton with enhancement of 1000-fold strong excitation signals in nanoscale localized volume as small as λ/60. The Au nanofilms coated at SiO2 nanopillar arrays have advantages on better imaging resolution: plasmon nanofocusing at cap of hybrid nanopillar arrays for enhancement of fluorescence. On Au nanofilms coated on substrate of nanowire arrays, there are also effects of blocking light transmittance except nanowires apertures, as so to reduce background illumination signals. e could confirm that SiO2 nanoantennas terminated Au nanofilms represents light localization at the metallic surface and plasmon nanofocusing in the vicinity of metals of probing tip. These results can be evaluated as fluorescence enhanced structures detecting subwavelength single-molecule inside cells. 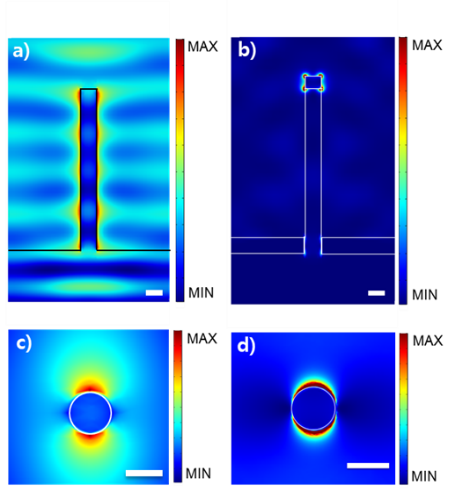 Therefore, we expect that SiO2 nanoantennas capped Au nanofilms substrates can apply to enhance the imaging resolution under diffraction limits. Also these structures can be a great platform to probe deformation of cells and comprehension of the interface between cells and nanoantennas.