Windowless in situ imaging at at increased pressure: Perforated MEMS chips in an ETEM

For our understanding of processes that are induced by the interaction of a material with its surrounding, observation of isolated systems in vacuum, such as in conventional transmission electron microcopy, are not sufficient. The switching from imaging in vacuum to observation of dynamic processes in the presence of a defined gas-phase has already demonstrated the immense potential of in situ electron microscopy.

Presently, in situ observation of processes related to catalysis, corrosion, material growth and decomposition are either performed using environmental TEM´s, i.e., instruments that are equipped with a differentially pumped objective lens1, or based on the use of membrane-type gas cell holders that can be inserted into the column of conventional TEM´s.2

Experiments in environmental TEM´s are generally limited to maximal pressures of up to ~ 20-30 mbar and the use of gases that are compatible with the exposed components of the objective lens. Due to the tiny amount of sample compared to the relatively large gas-volume, detection of catalytic conversion is difficult.

In the case of membrane-type gas cell holders, experiments at pressures up to a few bars and, due to a better confinement of the gas-phase and reduced dead-volume, detection of catalytic conversion, as well as the use of corrosive gases, is possible. The main drawback of the insertable micro-reactors is associated to the use of electron transparent windows that are needed to shield the vacuum in the TEM column against the gas volume of the micro-reactor. Although electron beam transparent, the two 30 and 50 nm thick SiNx windows add significant background to the recorded images and reduce the obtainable resolution.
As a consequence, the ability to detect nm-sized particles and structures consisting of light elements is reduced.

In order to combine the advantages of both approaches, we performed in situ experiments in a “Vortex” JEOL Grand ARM, which can be operated in an environmental mode, with micro-reactors that contain perforated SiNx windows (Figure 1A-C). In this way, we are able to obtain high image quality while simultaneously preserving relatively high pressures inside the reactor cell.

Windows were cut into the top and bottom membrane using focused ion beam milling.
The pressure inside the reactor with the perforated windows was calibrated using pressure sensors at the in- and outlet line of the gas-cell holder. Using this approach, it is possible to perform window-free observation (Figure 1C, SMSI induced coverage of a metal nanoparticle), to record images using the secondary electron detector (Figure 1D, copper oxide) and to measure catalytic conversion. Simulations are being performed to estimate the effect of the holes on the local pressure and temperature variations due to gas expansion into the column. 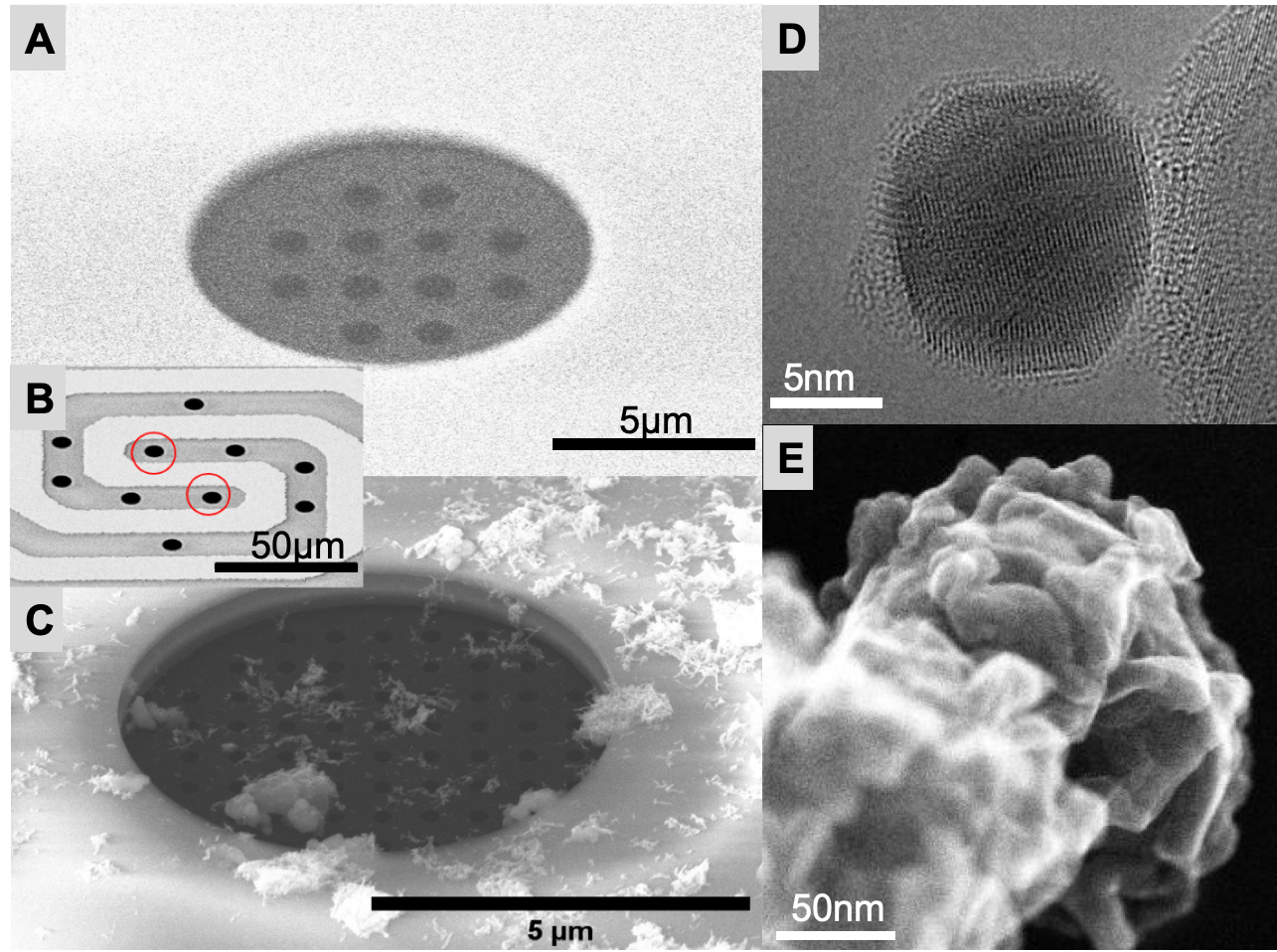