Foraminifera are single-celled microorganisms found in most marine environments. They often form shells of calcium carbonate and thus act as a major sink of CO2. Ocean acidification, caused by the elevated atmospheric CO2 levels, poses a threat for these microorganisms as it becomes increasingly difficult for them to construct their shells. Thus, we propose that this environmental stress is reflected in the shell morphology. Foraminiferal shells become part of the marine sediment as they die and thus by taking a sediment core allows us to study foraminifera and reconstruct recent environmental changes.

To assess morphological differences in the shells, we used both laboratory and synchrotron based x-ray microtomography (µCT) to image hundreds of specimens from different depths in the marine sediment cores. Exploratory laboratory µCT scans (Figure 1) were performed at the 3D Imaging Center at the Technical University of Denmark on a Zeiss XRadia Versa 410 instrument, whereas the bulk of the samples were imaged at beamline BL47XU at SPring-8 in Japan. In both cases, the voxel size was around 500 nm with a field of view large enough to cover the entire foram.

From the recorded tomograms, we produced 3D isosurface meshes to calculate morphological properties such as surface area, volume and shell thickness. For some of the properties, we found a significant correlation with environmental changes while others seem to be unrelated. This may be due to the variability of the shell size (age at deposition), which means that further scans are needed to improve statistics. 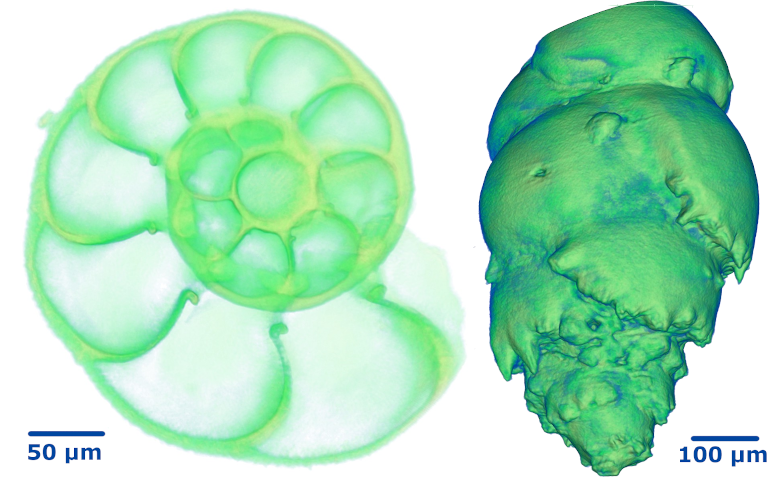 Figure 1. Two species of forams imaged at the 3D Imaging Center at the DTU: E. clavatum shown semi-transparent to reveal the internal structure of the shell (left) and B. marginata as solid 3D model (right).