The reduced dimensionality of nanomagnets leads to significantly different properties as compared to the bulk materials. The magnetic thin films and multilayers for example can show unique properties at the interfaces due to effects like symmetry breaking and spin-orbit coupling. These interfacial effects may appear at length scales of single to few atomic layers. To understand the origin of such phenomena, we need characterization techniques capable to determine the magnetic properties at these length scales. Electron magnetic circular dichroism (EMCD) [1] is such a technique which can be used to measure the magnetic properties of the materials in parallel with analysing the nano-scale structures in a transmission electron microscope (TEM). Using EMCD, the element-specific magnetic moments of single atomic columns can be measured, but a number of challenges hinder to achieve this goal. For atomic resolution EMCD, the measurements are required to be carried out in the zone axis where the distribution of magnetic signal in the diffraction plane is far more complex than the in the 2 beam orientation used in the classical EMCD measurements. In addition, large electron beam convergence angles are needed to obtain atomic resolution electron probes which convert the diffraction spots into overlapping discs making the detection of the weak EMCD signal difficult. Recently Negi et al. [2] proposed the use of the so called ventilator apertures (VA) to detect EMCD signals with atomic resolution. We have fabricated such apertures and experimentally obtain a clear EMCD signal. In addition we propose a simplified version of the VA to reduce the experimental complexities. We use this simplified aperture to obtain a clear EMCD signal with a beam semi-convergence angle of 10 mrad.

In a first step, we fabricated the ventilator apertures proposed  in [2]. We built the apertures in EELS spectrometer entrance aperture (SEA) holder. We used a bcc Fe crystal to demonstrate the experiments. The sample was tilted to a [001] zone axis. The inner and outer collection angles of the apertures were set to 12.5 mrad and 25 mrad respectively which are the optimum values predicted by theory. The experiments were carried out in STEM mode where a fine electron probe was scanned across the sample and a 2D EELS image was acquired at each scan point, resulting in a 4D dataset. The beam semi-convergence angle was set to 5 mrad. The EELS spectra needed for the EMCD measurements were extracted from optimum scattering angles in the 2D EELS images. Furthermore, we built a simplified ventilator aperture which not only reduces the experimental complexities but can also be used for multiple crystal symmetries. The additional advantage of this simplified aperture is that both the EELS spectra needed for the EMCD experiment can be simultaneously acquired. We used this aperture to detect the EMCD signals in [110] zone axis of Fe with a beam semi-convergence angle of 10 mrad. The experiment was performed in similar way as described for the ventilator apertures above. 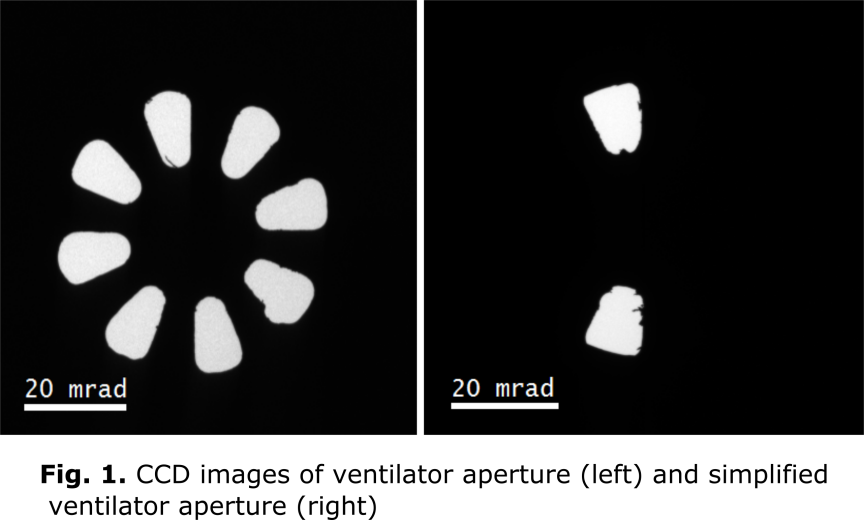 We detected clear EMCD signals with both the ventilator and the simplified ventilator apertures. The EMCD signal shown in Fig. 2 is obtained by the use of simplified (two hole) ventilator aperture for [110] zone axis of Fe with a beam semi-convergence angle of 10 mrad. A clear, well above the noise EMCD signal is detected at both the L3 and L2 energy loss edges of Fe. At 10 mrad semi-convergence angle, the diffraction limited electron probe size is 1.2 Å [3] which is sufficient to resolve the atomic planes of most of the magnetic materials. 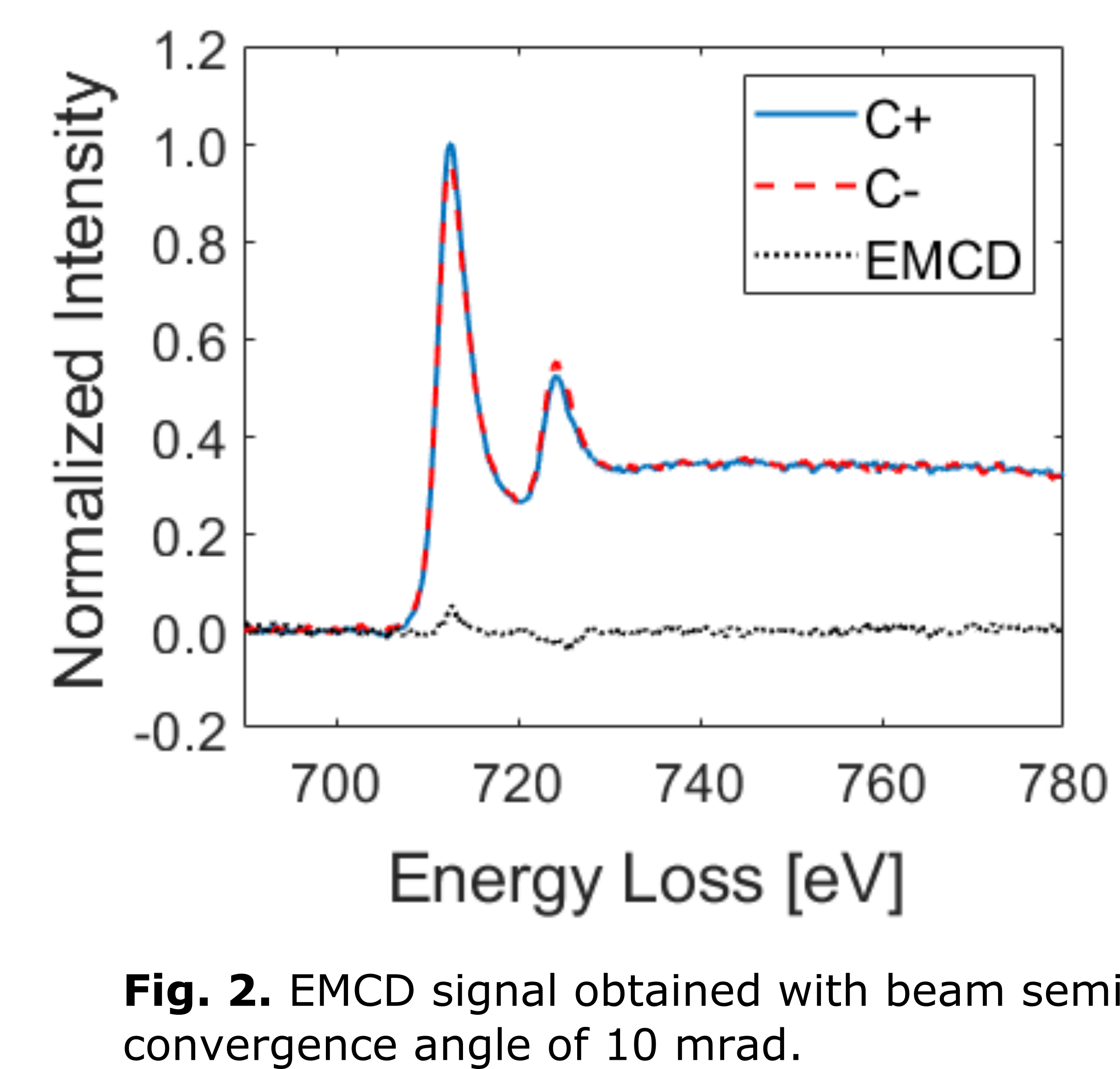 In all the EMCD experiments, the data was acquired in 4D-STEM format. This kind of data acquisition has several advantages on the conventional 3D-STEM spectrum imaging technique. First, the residual aberrations left in the EELS spectra due to the complex shape of the apertures can be corrected in the post-processing steps. Second, the two EELS spectra required for the EMCD experiments can be simultaneously acquired as done for the EMCD signals shown in Fig.2. The simultaneous acquisition is essential to guaranty the same experimental conditions for the two EELS spectra as discussed in [4].

In conclusions, we have shown the acquisition of EMCD signals in zone axis of Fe by the use of custom-made apertures. By the optimization of experimental procedures, we have detected a clear EMCD signal for a beam semi-convergence angle of 10 mrad which corresponds to an atomic resolution electron probe. Thus, this work enables the detection of EMCD signals with atomic resolution electron probes.